With Juventus that bought Federico Bernardeschi, Inter Milan DS Piero Ausilio that did the same with Borja Valero and with AC Milan that officially announced Croatian striker Nikola Kalinic some days ago, is clear that Fiorentina needed to redesign his offensive unit.

All of those footballers highly contributed to Fiorentina’s attack this past season. Bernardeschi produced 14 goals and 5 assists in 42 appearances despite the increased defensive watch he attracted; Kalinic was the centerpiece of La Viola’s offense since Fiorentina bought from Dnipro for just €5.5 million; Borja Valero registered 10 assistsand an 89.5% of passing rate. The Spaniard also gave Fiorentina that extra little bit as he was team’s playmaker: La Viola was dull and weak without him and the attack became predictable.

If Fiorentina wants to continue to compete with the Serie A lite clubs, they needed to bolster their offense through the market. Club strategy looks clear: Fiorentina are a self-financing club that have to fundraise resource from themselves, with few cash coming from the ownership. There is no reason to get rid of that.

So, La Viola sell her top prospects trying to sub them with something good and cheap coming from the outside. That’s the reason why Fiorentina brought back d.s. Pantaleo Corvino as he’s well-versed on rebuilding cheap veterans or rising stars.

That said, is obvious as Fiorentina offense faced a huge turmoil, both technically and tactically.

First and foremost, losing Kalinić wouldn’t automatically give Babacar his first, true chance to lead the line. In fact, Fiorentinabrought on Giovanni Simeone. A physically gifted player, the son of Atletico Madrid’s manager Diego Simeone represents an  upgrade over Khouma Babacar. The Argentinian is well-suited to play according team’s tactical needs while Babacar is a more direct striker. Lining up Simeone would open up options tactically as he’s more altruistic and suited to play with the team than Babacar.

On his first press conference since he was hired as Fiorentina new coach, Stefano Pioli openly admitted that 4-2-3-1 will be team’s primary shape. He also pencilled Riccardo Saponara as the trequartista. This can be the guy that the team builds around.

Saponara was under-utilised since he joined the team during last winter Mercato but he also failed to show what he can do when he was employed. That’s happened also because Saponara was accustomed to play as lone No.10 in a 4-3-1-2 system so he troubled to adjust himself to a formation featuring two trequarti. That was the system installed by Paulo Sousa in which you have two No.10 operating on their respective half-spaces. In fact, the Portuguese manager quickly ran a 3-4-2-1 featuring the aforementioned two No.10s.

That limited Saponara’s production to just 29 appearances, 4 goals and 3 assists.

Things could improve under the new regime. In Pioli’s designed 4-2-3-1, former Empoli and Milan No.10 will get an opportunity to act as lone attacking midfielder and it should improve his chances to succeed.

Lining up a mobile and unselfish forward as Simeone will give Saponara the needed spaces to attack and also will allow him to build a lot of upfront combinations.

With Federico Chiesa moving up and downs to the left side, the big question has been be how find a replacement for Bernardeschi on the opposite side.

In the way to buy the right replacement, La Viola has completed the signing of Monaco winger Gil Bastiao Dias on a two-year-loan deal with an option to buy for €20 million.

Dias has the ability to play on both flanks and was also lined up as an attacking midfield  during his career.

We known also that Fiorentina added Valentin Eysseric to their offensive weapons. The 25 year old  French citizen is a brilliant winger with a lot of technical skills. He also able to sprint down the sideline, cross the ball, and beat other players in one vs one situations. He was a key part of last season Nice’s run in Ligue 1.

The Portuguese Under 20 international’s arrival could push Rafik Zekhnini and Ianis Hagi down the pecking order, but with 24 of his appearances last season being out on the wing, will likely be deployed on the wings for La Viola.

That said the list of possible Bernardeschi’s replacements is very long.

Latest rumors linked Fiorentina with Sassuolo’s winger Matteo Politano. He’s established himself as one of the best Italian winger talents by posting 7 goals and 6 assists out from 38 appearances. A left-footed player, Politano can start on both flanks. He’s also able to cut inside and could become an important player in a while.

Although Politano isn’t a goalscoring threat as Bernardeschi, Sassuolo winger’s passing is really good, and he’s able to create chances for his teammates via through balls.

Clearly, Politano isn’t the lone name throwed in the mix as Bernardeschi alternative. In the latest hours emerged Yann Kamorah, a 19-year-old winger who plays for Ligue 1 side, Caen who’s also linked with Newcastle United. Kamorah is another offensive winger with good technical skills. His play is very qualitative.

Born in Abidjan in the Ivory Coast, Karamoh made his debut in Ligue 1 the past season, when he scored five goals, and bagged four assists out from 35 appearances. A French U21 international, Karamoh is mainly a right winger, but he also played up top as he did in the final three games of Caen’s campaign.

With Gil Dias, Chiesa and Eysseric and another winger in and with someone like Simeone up top, Pioli’s offense could look good.

The opening game against Internazionale was the first chance to take a look to the new Fiorentina and their significant signings.

The 4-3-3 from Pioli provides some surprises. The two centre backs and the defensive midfielder, Carlos Sanchez, form a defensive triangle in the centre of the pitch that provided Fiorentina a platform to build their attack through the defensive third.

The three midfielders for Fiorentina was positioned in a asymmetric mode. In fact, the first thing to note is that the midfield line for La Viola featured the aforementioned Sanchez as holding midfielder while Jordan Veretout played as left-interior midfielder.

But, whenever Fiorentina were in possession of the ball, Pioli’s side lined up in a kind of 4-2-3-1 system with Marco Benassi, playing as an attacking midfielder on the right half space.

With both Benassi and Veretout occupying the half spaces (although Veretout did it in a withdrawn role), wingers Eysseric and Gil Dias was charged to attack down the wide areas.

One of the most important aspects of the attacking gameplan of Pioli was the way that he wanted his side to play out from the back to ensure that the ball was progressed adequately. By the way, this method of progressing the ball forwards was obstructed by Internaionale’s high pressing tactics.

The home side ability to form attacking structures in the final third meant that Internazionale had possession and moved well the ball for long periods of the first half.

In fact, was just in the second half that Fiorentina (already down 2-0) was able to build sustained attacking moves.

In this example above we have Eysseric in the central area (where he moved himself  mainly in the second period) and Maxi Olivera supporting wide open with Sebastian Cristoforo (who replaced an uneffective Benassi) offering an option up top.

Immediately there are more passing options for the men in possession and these options allow Fiorentina to progress the ball forward towards the final third.

The improved attacking structure allowed Fiorentina to show some of their offensive potential.

Although the first game ended in a predictable loss, the new Fiorentina showed glimpses of light. Particularly they showed some potential when in possession of the ball.  That said, they have to be more able to get Simeone more involved in the final third in the way to transform this potential into real scoring chances. 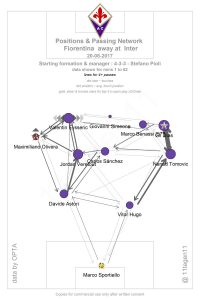 This passing map, created by the excellent @11tegen11 using Opta data, clearly confirms this.  As you can see the key connection in the final third was that between Nenad Tomovic and Gil Dias on the right-hand side of the field, but Fiorentina clearly lacked to conncet Eysseric and Gil DIas with Simeone.

This expected goals graphic above was created by @11tegen11 using Opta data. As you can see the expected goals for the match are clearly in Internazionale’s favour. Fiorentina had a large increase in the second part of the game but they were still lower than the skills Fiorentina’s offensive players have.

Since the Mercato started, a further turmoil within Fiorentina was highly predictable. With Bernardeschi, Borja Valero, and Kalinic that left Firenze, it was interesting to see what Corvino did to replace them. Some interesting names have came at Fiorentina but a look of Corvino to Balkans and, South America – his favorite areas of scouting – is not out of question to complete the roster. Fiorentina can’t compete with bigger clubs for luring established players so they need to be looking for rising talents. That’s the way Corvino is used to sweep and that’s what Fiorentina did again this summer. The hope is that it works better than in the first game of the season.