Out of the top five European leagues, there is one standout midfielder who ranks in the 99th percentile for goals scored from Central midfield, and he plays for …West Ham. Tomáš Souček has been one of the season’s biggest surprises, the lanky Czech midfielder only moved to West Ham 12 months ago. Playing in a formidable midfield pivot alongside one of England’s best young midfielders, Declan Rice, the duo have formed a solid foundation for West Ham’s impressive quest for a European place this season. David Moyes’ side is flying high this year, having accumulated 49 points, sitting in fifth with nine games to go to the end of the campaign.

The 6 foot 4 midfielder started his football career as early as 10-years old, joining Slavia Prague’s youth team, he would go on to make more than a hundred appearances for The Red and White’s. Even for a midfielder, he netted 31 times at Slavia Prague, a modest output for a midfielder who is not known to be attack-minded. Soucek won the Czech First League and the Czech Cup twice during his Slavia Prague career. Soucek joined West Ham in January 2020, and has already scored 12 goals for the club in 42 games.

A scouting report from fbref.com shows a firsthand glimpse of what Soucek offers. In summary, he scores goals, wins headers and defends well for his level. Let’s breakdown what Soucek does on the pitch that is so valuable to West Ham’s season. 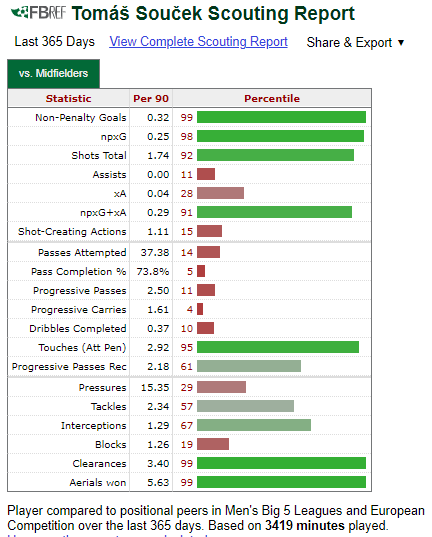 Soucek is not easy on the eyes, nor will he control games and rack up a hundred passes on the pitch, but he does a very effective job in midfield. His job is to provide a stable platform for the team on the defensive end, and during transition, he runs into the opposite box to cause all sorts of havoc with his aerial ability.

West Ham United started the season with Moyes’ preferred 4-2-3-1 system but a few bad results and injuries to key players forced his hand to adjust to a 3-4-3.

Lukasz Fabianski has been their regular number one in goal, a back three or back five of Czech full back or wingback is Vladimir Coufal, on the other flank is Arthur Masuaku at left-wing-back. Aaron Cresswell when deployed in a back three is the left-centre-back position but in the 4-2-3-1 he operates in his more natural fullback role. Alongside Cresswell is any combination of Antonio Ogbonna Issa Diop and Craig Dawson.All the three centre backs are good in the air and strong ball-winners. Declan Rice and Tomas Soucek offer steel and solidity in front of the back-five or back four.

Up front, West Ham play Jarrod Bowen, Pablo Fornals, Michail Antonio, Said Benhrama and more recently, Jesse Lingard. Michail Antonio leads the line as the lone striker most at times, with Jesse Lingard playing in the hole behind him. Before Lingard joined in January, Antonio was flanked by Fornals and Bowen as the advanced forwards in the front three of the 3-4-3/3-4-2-1 system.

The Hammers approach games with a conservative style, sitting off their opponents, absorbing pressure and hitting teams on the counter attack. They are a solid defensive side due to the protection Rice and Soucek offer in midfield, the duo are also pivotal when it comes to transitions as they release the ball to runners in Antonio, Bowen and Lingard.

West Ham do not have much of the ball, the Hammers average around 41% possession this season, the 6th lowest in the league, almost on par with Sean Dyche’s Burnley side. Due to their low possession statistics, the Hammers attack quickly and fly out on transitions using width, crosses and short incisive passes. David Moyes’ side move the ball intelligently creating some high quality chances even with their possession.

Soucek is often passive and does not actively engage opponents in midfield, rather waiting for opponents to take him on before using his body to get in between them and the ball. Soucek ranks just above league average in tackles and interceptions according to fbref.com, the Czech dynamo’s defensive ability comes mainly from the amount of ground he is able to cover alongside Declan Rice.

Since West Ham’s midfielders are not required to actively press or close down opponents in their own half, Soucek’s defensive actions often take place in his own half in front of his defence. His lanky frame and long legs allow him to go into duels without aggressively diving into crunching challenges, rather he uses toe pokes and other unorthodox styles to rob the opponent midfielder of the ball.

Soucek specializes in what i call “hustle” plays, the kind of challenges that are sort of 50-50 where the ball is there to be won. He utilizes his lanky strides and long legs to poke the ball past the opponent, and he also uses his large 6 foot frame to get into the body of opponents to steal the ball.

In the sequence below, the ball is loose after an aerial duel, Soucek sees Pogba coming towards the ball and Soucek does the clever thing, toe poking the ball under Pogba and continuing on to transition.

In the play above, Soucek demonstrates this incredible ability again, spotting the Aston villa midfielder fighting off Michail Antonio, so he steps in and nicks the ball off him to put the ball in Antonio’s path for the counter attack.

When it comes to his offensive qualities, Soucek possesses some attributes that cannot be quantified by stats: he is a willing runner into the attacking areas, and even though he is not rapid, he can dart in behind defenders to latch onto crosses. This is his strength in the final third, finding spaces in the box to score. He does it very well too.

In the sequence above, look at where Soucek starts his run from, behind the fullback, darts into the space between the defenders and powers it past the keeper.

Soucek has a knack of getting into the right areas at the right times, and is a constant threat in the box during set plays. In this goal against Manchester United, look at where he peels off the last defender and gambles on the ball going near the far post, leaving him to an easy tap-in.

Soucek unsurprisingly ranks below the 15th percentile for passes attempted, progressive passes, and pass completion for all Central midfielders in Europe’s top 5 Leagues. This does not mean he is a bad passer, it just means he does not have possession of the ball often, thus he is not passing it at a high volume. But when he does decide to pass, he does it intelligently, he is not a wasteful player on the ball.

In this clever play by West Ham, they are able to penetrate into city’s area and Lingard manages to shoot but the deflection floats towards the near post where Soucek wins the aerial duel setting up Michail Antonio who only missed hitting the target because of brave goalkeeping from Ederson.

Soucek is a very versatile weapon to have in and around the goal, he works hard, makes runs and contests every ball. He’s also a player who does not demand a lot of and ball and does a lot of his work off it. 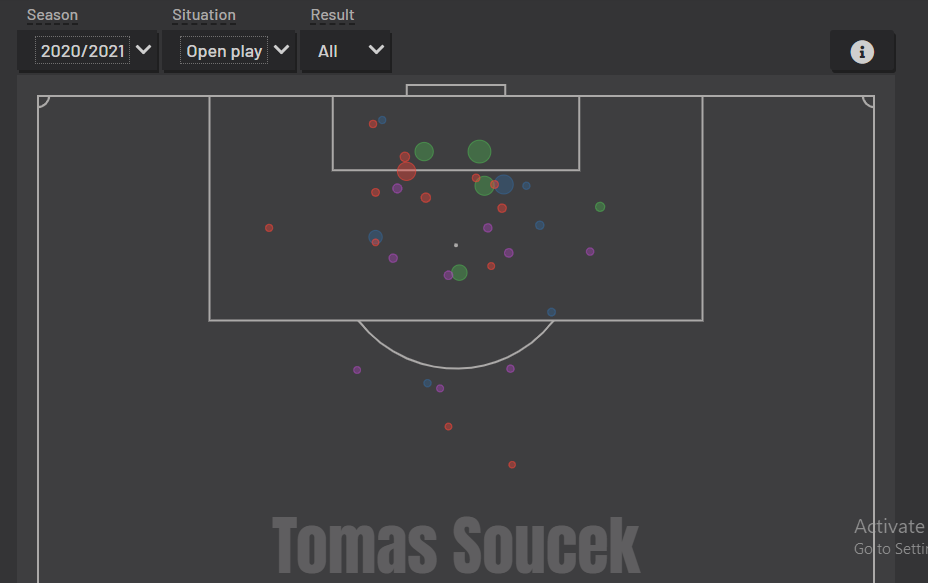 Look at Soucek’s shot map (from open play situations) via Understat.com, he’s great at creating space and separation to get shots in dangerous areas, be it in the air or on the ground. As long as the ball is near the opposition penalty area, you can bet that Soucek is already making a run into the box. Soucek is not just a battering ram in the air, he’s also quite useful in attack on the ground, he has the footballing IQ to produce little flicks, and can thread passes and switch play when under pressure.

Soucek averages 1.66 shots per 90 minutes, with 0.66 of those shots on target per 90. He is a very efficient “shooter”, he does not shoot the ball a lot but when he does, there is a high chance it is on target.

Tomas Soucek’s signing was a masterstroke by West Ham, the midfielder’s performances since last year have catapulted West Ham into contention for a European place this year. David Moyes has built a formidable side, the team is more about the parts than the individuals, impressive defensive work by Coufal, the back three and Rice and Soucek and very good attacking play from Antonio, and more recently Jesse Lingard. The key to meshing the two parts of the team, however, has been the work Soucek puts in on and off the ball. He also does it without the team over relying on him. Don’t be surprised if after the long wait for European football at the London stadium, the Hammers and David Moyes finally deliver.