Central defensive-midfielder Thomas Partey, a 24-year-old Ghanaian international, spent much of his time in Atletico Madrid’s ranks as a bit-part cog in Diego Simeone’s side in the last two seasons. But all that has changed, so far, in the current 17/18 campaign.

In Atletico’s second match of the season, Thomas let Atletico supporters know that he was going to be fighting for top minutes after a superb outing in Atleti’s 5-1 thrashing of Las Palmas. It was his first start of the season, he has since started seven of 12 across all competitions, and he didn’t disappoint.

Correa proving decisive again and Carrasco added some end result to dribbling. Godin good as ever and Partey is my MOTM so far

That match saw Atleti use excellent transitions from defence to attack and their pressing phases were in full force. On one particular press, which is interestingly called ‘closing the fisherman’s net’, you could see how Thomas’ excellent reading and man-marking helped Atleti complete the press successfully and win the ball.

His physical attributes, he’s 6’1” and weighs just over 160 pounds, has always helped him in his 1v1 defensive duels due to his long legs. He can recover from poor footwork due to his reach and is very active in getting a foot in once he has locked onto his target. But, above, you can see his reading and integration into Atleti’s pressing system has improved. However, he still has some defensive coverage weaknesses that we will get into later.

For now, we’re going to analyse some of his improved attacking qualities. The video below will break down the following areas in which Thomas has improved this season:

He demonstrated a lot of these skill-sets in Atleti’s Champions League match against Roma:

Now, we’ll examine his improvements and continued weaknesses further, below, with video-by-video breakdowns. But we briefly need to discuss his role, his technical positions on the field, and how his skill set fits into Atletico’s system.

Thomas plays in a defensive midfielder role but will occupy central midfielder responsibilities and positions when Atletico are in possession in the opposition half. The graphic below shows his most common position on the pitch. 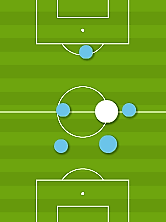 The white circle displays his most average position which is central defensive-mid. The other blue circles show positions he also frequents in certain phases of play. The bigger the circle, the more time he spends in that position, according to Wyscout.

Furthermore, tactically and strategically, Thomas’ physical frame, pace, and safe passing distribution cater to Atletico’s style of play. Thomas’ is very good at winning the ball via excellent 1v1 defensive duels and is good at looking for vertical options to pass on the counter or in a transition from defence to attack. In possession, or when dealing with compact opposition defences, Thomas is required to support the attacking overloads, change the points of attack, and anticipate and stop counters.

His ball-winning abilities combined with his physicality and long legs allow him to win the ball in high-pressing (seen above), counter-pressing, and defensive block phases. The attacking qualities video above was mostly a bunch of improved qualities edited together. So let’s look at his improvements and weaknesses in more skill-by-skill manner.

Given Atleti’s direct style, Thomas often tries long-range passes to get behind the defence. The video above is just a sample size of his archived long-ball attempts, but a majority of the passes are slightly inaccurate and don’t threaten the opposition. This is an area where Thomas needs to improve. ESDF’s Wyscout archives revealed much of the same – majority of his long-range balls aren’t good enough.

The biggest improvement has definitely been Thomas’ ability to find good short-to-mid-range vertical passes in transitional, build up, and possession phases. He’s getting better at breaking lines and providing balls behind opposition defences. Have a watch below.

Another one of Thomas’ weaknesses, despite being great in 1v1 defensive actions, is his defensive positioning late in games (likely due to tiredness) and in transition from attack to defence, specifically, positioning himself in poor areas around his own penalty box. Have a look.

1v1 defending and tackles are some of Thomas’ best attributes and one of the reasons why Simeone has trusted the Ghanaian with more quality minutes and starts this season. He’s far from being a top La Liga midfielder, let alone in the world, but Thomas is showing he is one of Europe’s best defensive midfielders under the age of 25.

It’ll be interesting to see if he continues to improve. He’s undoubtedly been the most improved player among the ‘fringe’ along with Angel Correa. In closing, Atletico Madrid has a bright future and their defensive midfielder position looks to have found a replacement for Gabi.