From the verge of being loaned out last summer to becoming one of the top scorers in the Argentinian Primera, it’s been quite a turnaround in the last twelve months for River Plate forward Sebastian Driussi.

That’s not to say Driussi’s rich vein of form has come from nowhere. A swaggering star striker for the Argentina side that won the U17 Sudamericano in 2013, Driussi hit five goals in eight games and lead the line as the Albiceleste went on to reach the semi-finals of the U17 World Cup that same year.

Driussi’s exploits for the national team saw him fast-tracked into a River side recently reinstated to the top tier following their historic relegation and he made his debut at the tail end of 2013. The arrival of Marcelo Gallardo midway through 2014 brought about a spate of trophies back to the Millonarios, including back-to-back Sudamericana and Libertadores, and Driussi found himself getting more game time, albeit not as a regular starter.

However, with only five goals in his first 63 appearances, there was a feeling that Driussi wasn’t quite living up to the expectations. Most of this can be put down to the fact he was often played on the wing or in midfield, sacrificising his usual role up front to suit the needs of Gallardo’s all conquering system and gain invaluable experience at the highest level.

It would prove to be an important early test in his fledgling career. His perseverance paid off and, with Huracan and Velez looking to take him on loan, Driussi asked Gallardo to be given a chance in his preferred role up front during a pre-season tournament in Orlando. He performed well, remained at River and repaid the faith shown in him with 13 goals in 22 games in the second half of 2016.

Driussi has continued that purple patch into the New Year and is currently in contention for the Argentinian golden boot with 13 goals this season. Also on form in the Libertadores with three in as many games, the recently turned 21-year-old is once again considered one of the hottest properties still plying his trade in the Primera.

One of the things that stands out about Driussi is the variety of goals he is capable of scoring. Predominantly right-footed, he can also strike the ball well on his left, as demonstrated by his goal against Tunisia in the video below. Equally adept at finishes from distance as efforts inside the box, Driussi also boasts savvy movement, good pace and skill that make him a real handful for opposition defenders.

His sensational bicycle kick from the edge of the area against Uruguay also shows he can pull a bit of magic out of the bag at any given moment too.

For all his eye catching strikes, Driussi has the poacher’s instinct too. His awareness, intelligent off-the-ball movement and nose for goal mean that he is a real fox-in-the-box, as shown in the video below.

Another example of Driussi’s clever movement inside the box is his understanding of when to hold or delay his run into the box, which often sees him in acres of space and able to get shots away while everyone else is drawn to the initial ball. It might be a stretch to label it a trademark move from Driussi but he has certainly profited from this to score goals of this type on a number of occasions.

Driussi’s varied repertoire of finishing also includes good heading ability. At 5ft 10, Driussi is not as diminutive as your typical Argentinian centre forward but he’s certainly not a target man and therefore relies more on his clever movement inside the box. It’s an area of his game that still needs some work but is often an unappreciated aspect of his game.

His goal against Arsenal de Sarandi in the video above is a perfect example; a run to the front post, before drifting back into the centre of the box behind his marker and finally darting in front of his man again to head home from close range.

While at his best as a forward, Driussi’s time spent as a midfielder means he is capable of functioning in a number of positions. Initially under Gallardo, Driussi found himself on the wing, occasionally as a central playmaker and sometimes even as a deeper midfielder. Given River Plate’s focus on possession-based football, Driussi had to hone his passing and link up play, which means he is not merely a finisher but also a provider.

Driussi’s ability to drop deep and pick a pass has proven particularly effective when paired alongside another striker, such as Lucas Alario, and his close control, movement and technique allows quick, intricate link up play in the final third. The final clips of the video also show his good crossing ability too.

In the example below, Driussi has found a pocket of space in front of the defence and continues to drop deep. As the advancing River midfielder takes his marker with him, opening the space for a square ball into the centre of the pitch, Driussi finds himself in a position to receive the second pass and turn into the space between the two Aldosivi deep lying midfielders. Driussi then draws the deepest of the centre backs out of the defensive line and, spotting the inverted winger’s run from right to centre, has the ability to slip a perfectly weighted ball in behind the defence to present a goalscoring opportunity for his teammate. 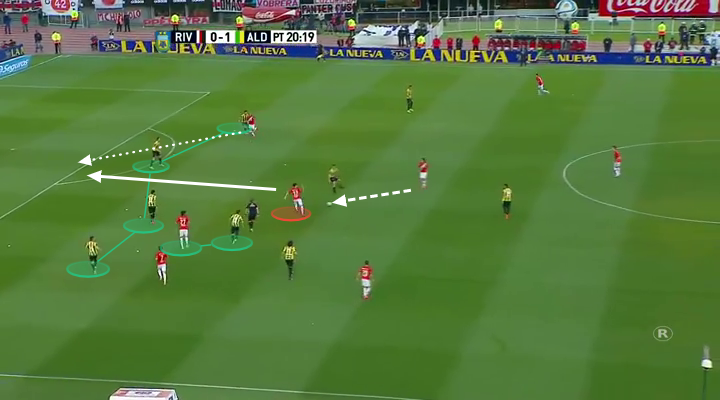 In the next example, we see Driussi in an even deeper role than before as he collects the ball near the centre circle before threading a perfect ball into the vacant right hand channel for the overlapping full back to run onto. He has at least four teammates in more advanced positions than him and it shows his comfort in midfield roles too. Driussi often likes to drift into the wide channels and his passing ability makes him effective in these areas too, no doubt helped by his time spent playing on the wing. In the final photo, we see him carrying the ball on the left wing before bending a defence-splitting pass with the outside of his right boot to put the centre forward one-on-one with the goalkeeper. The ‘gambeta’ (dribble) holds a special place in Argentinian football, encompassing the guile, creativity and flair forged on the potreros around the country. Driussi may not have searing pace but he has a good burst of acceleration combined with his excellent skill and technique, which allow him to carry the ball, dribble out of tight situations and win one-on-one attacking duels.

As you can see in the final clips, this skill also is a potent weapon for drawing fouls in dangerous positions or to relieve pressure for his team.

Heavily linked with Tottenham during the transfer window, it’s not surprising that his goalscoring exploits have not gone unnoticed. A host of Italian clubs are closely monitoring him with Roma, Fiorentina and Lazio all possible destinations this summer.

In the meantime, River have started their Libertadores campaign strongly and Driussi will be hoping for an extended run in the competition and may even put off a move to Europe until the end of the year if River are still going well. Wherever he ends up, Driussi looks to be finally realising his obvious potential and would be a multi-talented and versatile option up front for whichever club that eventually lands him.