How to replace Alexis Sanchez?

Last summer’s rumours are firming up: Alexis Sanchez should leave Arsenal this year, either during the actual transfer window or at the end of the season. While it was clearly the Sky Blues that led the deal, with a bid reaching £30 million (according to latest gossip), Manchester United come with swap deal offers plus cash (perhaps Mkhitaryan or Smalling).

Here, we’re not interested in how Pep Guardiola would manage his attack with Sanchez or how Alexis Sanchez would play under Mourinho, but how Arsene Wenger will find a substitute player for the Chilian, who is maybe the most important player in the Gunners squad.

We will not only analyze multiple players, chosen in a subjective way, but with a database containing more than 400 players with their statistics, we’re going to use a more scientific method to find players that fit with Alexis Sanchez’ specificities.

Firstly, just take a look at Sanchez’ qualities and statistics :

As everyone knows, Alexis Sanchez is a dribbler with preference to run inside the box and then shoot, a little bit like Arjen Robben on the right side.

However, while he was known as a selfish player when he played for Udinese, playing for FC Barcelona with a team obsessed by ball possession and tiki-taka have made him a more complete and especially smarter player.

With Arsenal, we often see him cross or change the game, throwing long balls on the other side. Furthermore, and undoubtedly what made him a special player, he’s always hungry for balls and therefore he defends and presses a lot, not accepting the loss of the ball.

So, to find players that look like Alexis Sanchez, we will use a method to partitioning players between different categories and then look at those who are in the same category as him. If you want to know more about this method you can look at the final paragraph.

To facilitate the analysis, we filter players to get those who played more than 3000 minutes over the last year and who are between 23 and 30 years old. We kept right winger and strikers because Alexis Sanchez sometimes played in these positions, and with Arsenal he almost played as a second striker (see passmap against Chelsea). Firstly, we just look at players through dribbles and goals per 90 minutes, the main qualities of Sanchez and probably what Arsenal are looking for. 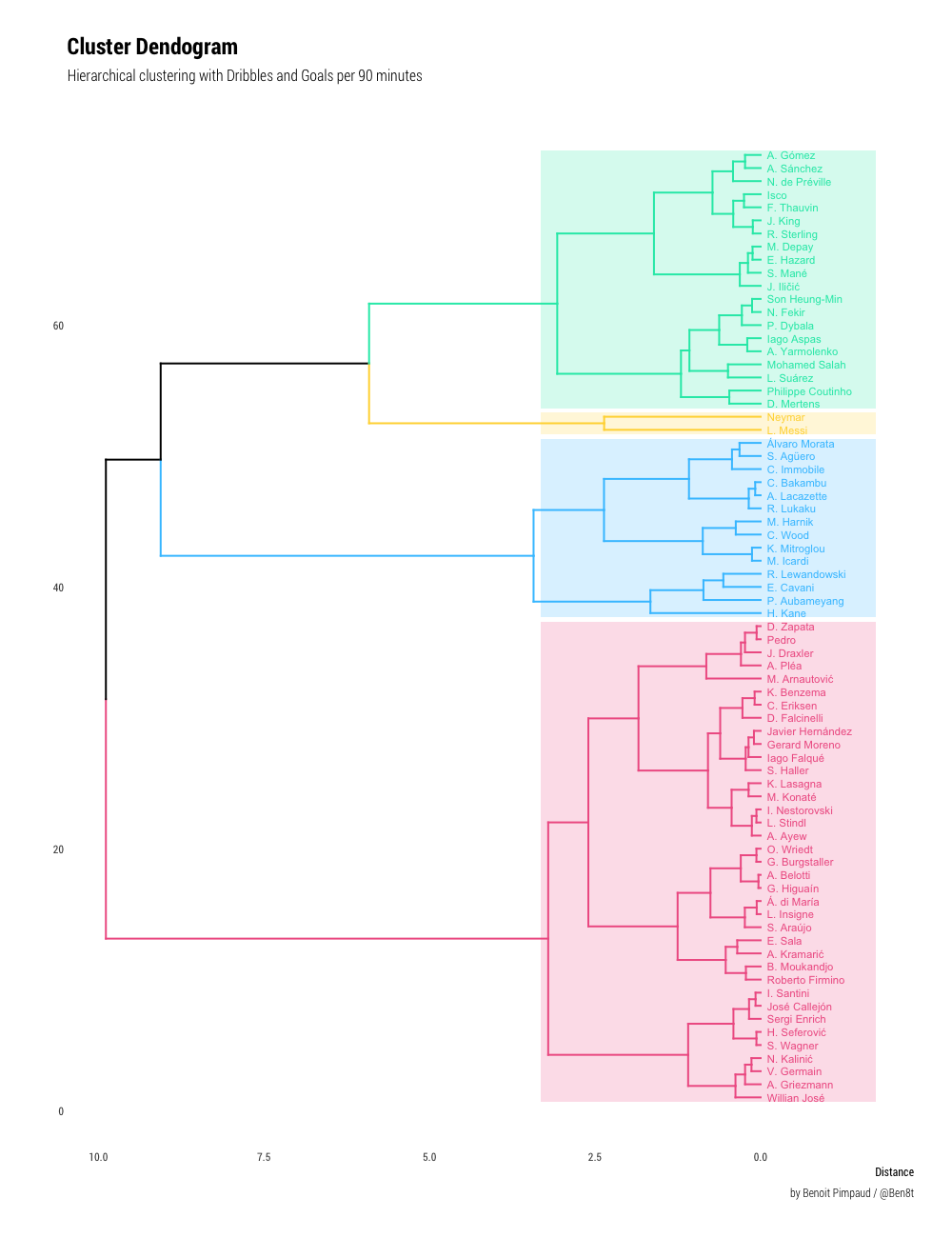 Here we choose to separate players into 4 parts to have a main vision.

Without surprise (but still important) Neymar and Messi are out of comparison.

The “blue” group is composed of strikers, who score more goals than others, while Alexis Sanchez is next to quick wingers. The closer player is Alejandro Gomez playing for Atalanta who is, like Sanchez, strong to hold the ball, dribbles and give key passes.

However, he’s maybe not a player of Arsenal standing. Moreover, he’s already 29 years old and he has low experience at the highest level (he only played for Atalanta and Catania).

Nicolas de Preville (27 years old) is the same kind as Alejandro Gomez, which highlights how Alexis Sanchez is a unique player (few other players look like him).

If we go up the tree a notch, we see players like Isco or Sterling, who probably fit more to what Arsenal is looking for.

Even though Isco is really appreciated by Zinedine Zidane in Real Madrid, Gareth Bale coming back and rumours about possible arrivals (Salah, Mbappe before he joined PSG or even Neymar in some tabloids) may block Isco’s progress in the Madrid squad. However, he has too much a playmaker profile to perfectly fit in the current Arsenal squad, having a similar profile to Ozil with a better dribbling appetite. He could be a perfect substitute in case of a Mesut Ozil transfer.

Raheem Sterling already appeared in transfer news about a possible transfer in Arsenal within a swap deal with Alexis Sanchez. In fact, Raheem Sterling perfectly fits with the position. Homegrown, he has a good experience at a high level and he showed how he can adapt himself to tactics and different positions on the field. Arsenal could count on him in the long run while he is only 23 years old, but Manchester City will not be ready to let him go easily. With all statistics, it’s Dries Mertens who is the closest to Alexis Sanchez. It’s a much better result while the Belgian’s profile matches perfectly with the Chilian’s.

They are approximately the same age (Mertens is 30 years old against 29 for Sanchez) and they have exactly the same measurements (1.69 m and 62 kg).

Moreover, they have the same qualities of dribbling, passing and being decisive in the last metres. Like Sanchez, Mertens can play either as centre-forward or on the left side and he has good experience at high level since Napoli passed a plateau in recent years, especially in the Champions League.

Lorenzo Insigne is also a good player, younger than Mertens (26 years old), he has a much more winger profile than his teammate in Napoli. Although he had difficulty finding a good level when he was young, today he is a major piece in the Napoli squad with good passing qualities (5 assists this season) but also good finishing skills (5 goals). His main quality is speed, which is maybe lacking in Arsenal nowadays.

If we look at players above (the other green layer), we can see some interesting names:

In the “yellow” group only Julian Draxler and Jose Callejon could fit with the position while the other players are strikers with the same profile as Alexandre Lacazette.

Seeing the Arsenal games, we can see that Sanchez is playing more and more as a forward than a winger position with Lacazette beside. Moreover, if you look at names in rumours it’s much more about right winger than names we talk about above (Malcom, Mahrez, or even Mkhitaryan in a swap deal).

So the idea behind this is to sell Sanchez and then play with Olivier Giroud as a striker with Alexandre Lacazette beside him. Moreover, Mesut Ozil would play in his favourite position and Arsenal would finally take the benefits of Giroud’s qualities and so cross in the box more often than they actually do.

Here we saw different players that fit with the Alexis Sanchez profile. While there are a lot of names, the ones that fit best are Dries Mertens, Lorenzo Insigne, Alejandro Gomez or Andrej Kramaric. They are not big names, but they all have a strong potential.

While there are still 15 days left before the winter deadline, Arsenal could also wait for the summer to do business and focus on contract extensions of Mesut Ozil or Jack Wilshere.

The last rumours talk about a transfer of Malcom (Bordeaux) or another right midfielder: maybe a clue of change in the Arsenal lineup.

A word on the method

The method behind these graphics is Hierarchical Cluster Analysis, which is a mathematical process to classify a set of object (here football players). To measure the similarities between the players, I used the Euclidean distance. For the similarity between partitions or clusters, the ward.D2 linkage method that minimizes intra-partition variance was chosen. In this case it is the method that gave the best partitioning structure.