In our first installment of Joshua Kimmich’s player analysis profile, we went over his defensive positioning and off-the-ball movements. We took a look at his ability to read the game in a number of phases, defensive and offensive, and came to the conclusion that he’s on his way to becoming one of the best right-backs in the world, if not the best.

So, before you check out this continuation analysis, be sure to check out part one as we also briefly touched up on Bayern Munich’s tactical system and Kimmich’s positional role.

Great analysis of Joshua Kimmich. @C_V_News breaks down his abilities and thinks he can become the best right-back in the worldhttps://t.co/UpBGHXDICF pic.twitter.com/yhWBPSPzn7

Anyway, for part two, we’re going to analyze Kimmich in the following areas:

In addition to defensive positioning and off-the-ball movements, it is the areas above that also illustrate just how much a modern full-back can be judged on and how his responsibilities are important in nearly all phases of play. It’s starting to become apparent that games are won and lost in midfield (and full-back) in the modern game.

Key passes: Finding the space after a switch of play

Key passes can come in many forms. Some can be in the form of excellently weighted switches of play, a horizontal pass to find the open man that isn’t pressed or marked by the opposition in a build-up and, of course, a line breaking vertical pass.

Now, most people consider the latter as the most commonly used action to describe a “key” pass, but, personally, I think any pass that evades or kills pressure or creates a direct scoring chance is a “key” pass. Anyhow, the next phase shows Kimmich playing for the German national team in a midfield role. With that said, while most of part one and this installment will cover strictly right-back, it is also good to show Kimmich’s positional versatility.

Below, we see how the ball is about to be switched to Kimmich in central midfield. Interestingly, what makes a switch of play so important in breaking down a compact defensive block is that when the opposition has to shift over to the ball side as one unit that is when some openings can be found in their block. 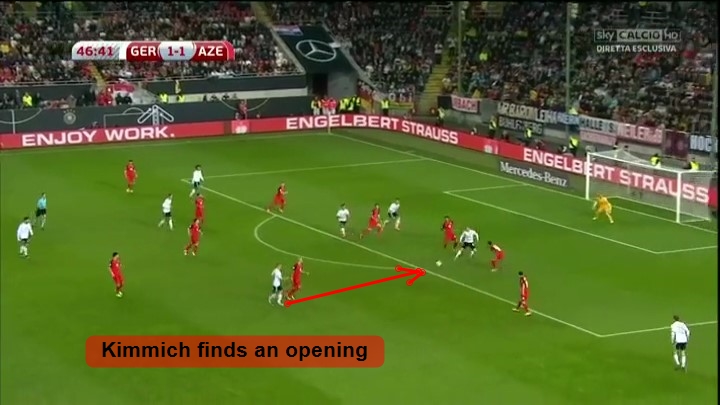 When the opposition low-block is shifting to the ball side; that is when mistakes can be made – as moving as one unit quickly can make room for error. Kimmich took advantage of that.

Key passes: Finding the space after a switch of play … again

Below is another example of a similar switch of play situation. The ball is switched to Kimmich, who is at right-back for Germany, and again he picks out the open man when the opposition low-block is switching over to his side. Crosses, in general, are some of the hardest passes to accurately deliver on a consistent basis in football, but it appears Kimmich is right on the money more often than not.

1 v 1 Defending: Baiting the ball carrier, making them feel comfortable, and then timing the tackle perfectly.

A lot of the legendary defenders throughout football’s history knew that there are times to aggressively pursue, hound, and throw the body onto the opposition ball-carrier, but there are also times to let them come to you.

In the next sequence, we see how Kimmich initiates a 1 v 1 with an RB Leipzig ball-carrier, backpedals about six steps to create the illusion to the ball-carrier that the distance is safe, and just when the carrier lifts his head and slows down to look at passing options, Kimmich pounces and drops a tackle. Kimmich understands that there are ways in which you can backpedal to create an illusion to give yourself more time to wait for the attacker/carrier to make a mistake. As I said in part one, he’s very intelligent. As a result, Jupp Heynckes, as do Bayern Munich fans, know they have something special with Kimmich. It appears as though he can do it all.