Pass, Pass, Pass. Watching Napoli is pure beauty in motion. In a time, which is dominated by teams focused on defensive stability and quick counter-attacks, Napoli is the exception. Former banker Maurizio Sarri evolved Napoli not only into a title contender but also into a team which plays beautiful football. With players like Hamsik, Mertens and Insigne, the second placed club from the south of Italy clearly have players who are technically perfect in tight spaces. However, one that many fans maybe oversee is the player right in front of the defence.

Jorginho, the midfielder who was born in Brasil but plays for the Italian national team is one of the most important players in Sarri’s system. He is the player who connects the team and makes those quick passing combinations possible. With his great passing abilities, he is usually the first crucial part of Napoli’s system. Therefore, a lot of teams try to close him down, why they should do that is what I am going to explain in that piece.

Usually, Jorginho plays in front of the back four of Napoli, most of the time he is positioned between the opponent’s strikers and midfielders. In this environment he often faces pressure, but like the whole Napoli squad, he is great under pressure. Most of the time he knows exactly where every player on the pitch is located and therefore is capable of passing with the first touch.

Here you can observe Jorginho in his regular position. He rarely leaves that position, only when he supports the left wing because that’s the side which Napoli usually tries to overload. However, he tries to hold the connection with the other side in order to be able to switch the play to the far side.

As I mentioned earlier, Jorginho is the guy who connects the whole team and therefore he makes everyone better. In the following scene, Allan has the ball and pushes forward. Jorginho quickly relocates his position and gives his teammate a passing option and Napoli the possibility to break through the opponent’s midfield line.

To create connections between teammates in order to continue the flow of the combinations a midfielder should always be aware of the position of all the other players on the pitch, especially the players around him. Jorginho regularly turns his head to scan the pitch, especially before he receives a pass like in this situation.

Look at his head position in the picture above, I highlighted with a red circle. He looks in the direction in which he wants to pass. This scanning of the pitch makes it possible for Jorginho to play a lot of his passes with the first touch what he wanted to do in that situation as well, but the pass he received was not accurate enough.

If you observe Jorginho over the full time of a game, it looks like his passes are just short ones to the next teammate. In fact, a lot of his passes are just short-passes to the next player. However, with those quick short-passes Napoli makes the opponent move and press, therefore, the opponent will make mistakes and open space which Napoli can use. Jorginho´s constant positioning in the structure of Napoli is very important to enable the combination play of Napoli.

A similar example here. Again, Jorginho quickly scans the pitch before he receives the ball. Especially, the far side because there should be space available for Napoli to attack. Because of the overload of Napoli on the right side, Inter shifts to that side and opens space for Insigne. Jorginho realises that structure and by using the first touch to perfectly switch sides, Napoli´s attack doesn’t lose the speed and therefore Insigne can use the red marked space. 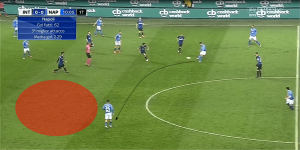 Compared to other central midfielders who usually play in front of the own defence, Jorginho also possesses the ability to play through balls behind the opponents last defensive line.

Jorginho has a variety of different pass-types to break down a defensive line. Quite often he benefits from the passing game of Napoli and their slower approach to advancing in the opponent’s half. Most of the time Napoli move the ball a lot before actually try to force the breakthrough. Therefore, Jorginho can push higher up the pitch because Napoli is well positioned for the counter-pressing due to their structure in possession.

Furthermore, Napoli usually attack with three players in the last line, Mertens, Insigne and Callejon often sprint without the ball in zones behind the defence, that’s why the opponent has to move deeper and as a result Jorginho receives space in zones from which he can play dangerous passes without being pressured by the opponent.

First of all, he has the classic flat through ball in his repertoire, which he can play accurately even through the tiniest spaces because of his great vision and feel for the dynamic of a situation. Here, Jorginho receives a pass from Mertens who quickly sprints into the red marked zone behind Genoa’s defence. This scene is a perfect example of Jorginho’s feel for the dynamic of movements. The available space for this pass is so small, however, Jorginho plays the pass in the perfect moment, when the defender moves more into the middle, therefore he can’t intercept the ball and Mertens has a big scoring chance.

Besides flat through balls, Jorginho also loves to play chip passes diagonally behind the defence. Because he prefers his right foot, he often moves into the left halfspace in order to have the possibility to reach almost the whole available space with a pass with the right foot. 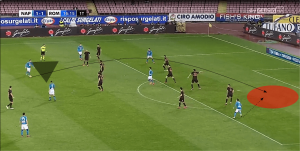 Here he receives the ball from the left side. He quickly turns and has his field of view diagonally towards his teammates and therefore realises the available space behind Roma’s left back. With an accurate pass, he finds Callejon. Again, because of the dangerous offensive players of Napoli, the circulation in possession and the missing active defending of Italian teams, Jorginho has a lot of space to operate.

Quite often Napoli use Jorginho’s ability to play long passes to break a deep defensive block. Normally they circulate the ball in deeper zones. With this circulation, they try to manipulate the opponent who moves forward and tries to pressure. Consequently, open space appears behind the last line. Due to the constant movement of Napoli´s offence, Jorginho receives space and then can play the passes behind the line.

Here, for example, Mertens moves deeper and de Vrij follows him. As a result, the space in the box is uncovered. Jorginho’s vision helps him to quickly realise the potential lack of Lazio’s defensive shape, by using a long ball he gives Callejon the chance to score. The remarkable thing in this situation was the accuracy of the pass. Jorginho plays the chip pass in exactly the right space, perfectly reachable for Callejon but not for the goalkeeper.

In the Serie A, Napoli’s players rarely have to defend. Because of their well-structured offence they can immediately counter press and either win the ball back or force the opponent to a long ball. Jorginho helps his team in those situations with his solid understanding of the game and his good defensive positioning. Quite often he is able to intercept by simply closing passing lines for the opponent.

The example above is one of a lot of situation in which Jorginho reads the intention of the opponents passes quite well and therefore can intercept the pass easily. Especially in the situation in which he has lost the ball, Jorginho shows his understanding of the situation by often moving forward to press instead of moving back in position. Because of his immediate forward pressing, he reduces the available space for the opponent and forces him to make decisions quickly.

However, during the defensive phase, Jorginho is in trouble when he has to defend bigger spaces. Because of the fact that his athletic abilities are not the best. With his height, he can quite often get a touch on the ball in a sliding tackle but quite often he doesn’t win the ball because his timing is not perfect. Furthermore, his lack of speed makes Napoli’s defence vulnerable in transition when they do not win the ball back quickly.

In a team which focuses so much on the beautiful passing game, Jorginho is the perfect central midfielder because he is able to find solutions under pressure and helps his teammates by constantly offering a passing option. What helps him massively is the fact that due to the weak pressing in Italy and Napoli’s dominant possession game he often receives open space to operate. In the Champions League and Europa League, he has shown that he doesn’t need that much space to operate because he is very good under pressure like all of Napoli’s players.

Clearly, he is one of the elite central midfielders and that’s why he also plays for the Italian national team. So, what happens next to Jorginho? Will he move on to another club or stay at Napoli? Unfortunately, he can’t play in the World Cup because Italy didn’t qualify. So, the only goal for Jorginho this season is to win the Scudetto with Napoli.