Taking the year 2000 as the start date of Generation Z, ESDF continues its series looking at some of the best young prospects born in the new millennium.

Such is the talent right now in Brazil that it’s impossible to properly analyse all their exciting prospects in just one article. In the first piece we looked at some of the more heralded young Brazilians – such as Vinicius Junior and Paulinho – but part two keeps the bar high with some more precocious players already attracting plenty of attention too.

In particular, there is a real glut of promising forwards and this is reflected in the players selected below. While it might be that striker is a position that stands out more at younger age groups, especially when limited stats are available, there is nevertheless no denying the abundance of talent emerging right now in Brazil.

If these teen tyros continue to develop at their current rate then in several years’ time there could a real selection headache for the national team boss.  Without further ado, here is the second batch of Brazilian starlets tipped for the top.

Santos are replete with young forwards right now and battling it out with the likes of Gabigol, Arthur Gomes and Rodrygo is U17 international Yuri Alberto. It speaks volumes of his talent that he has been featuring for the first team since he was 16 and this March he became Santos’ sixth youngest scorer after his goal against Gremio Novorizontino.

Hailing from the nearby Sao Jose dos Campos, Yuri Alberto netted 51 goals in 35 games for Santos’ youth side last year and was also in goal-scoring form for the Brazil U17s. Relatively tall for his age, pacey and a clinical finisher off either foot, he is more of a traditional centre forward than some of the wide forwards such as the aforementioned Vinicius Junior or Rodrygo.

Here we see a prime example of this combination of pace, power and accuracy in front of goal. 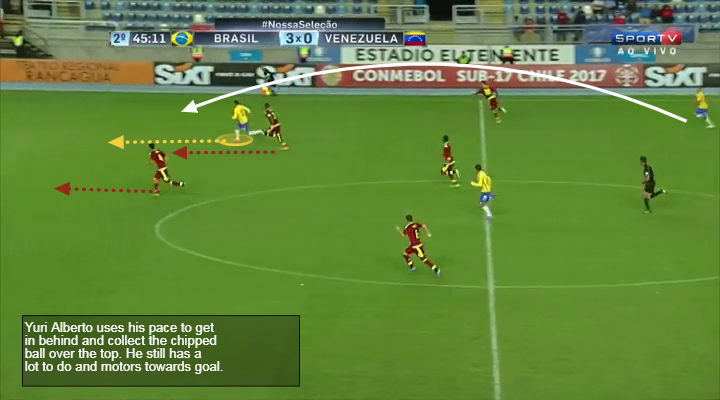 Given his stature and physique, Yuri is already able to mix it at senior level and is the type of centre forward who links play and brings others into the game. His first touch when playing with back to goal could do with some work but this will come with more experience.

Time is on his side and, given some of the more high-profile names at Santos, he should be given ample time to gain more experience. There has been reported interest from Manchester United and Arsenal in the past but a hefty price tag should ward away any potential suitors – for the time being at least.

Like Santos, Flamengo have a particularly exceptional group of prospects right now. While Vinicius Junior has understandably attracted the most attention, good friend and U17 teammate Lincoln won’t be in his shadows for too much longer.

A powerful number nine, Lincoln recently extended his contract with the Rio giants to 2023 and increased his buy-out clause to a whopping €53m. The first choice striker for a Brazil U17 not lacking in firepower, he scored five goals in their Sudamericano win last year and a further three at the U17 World Cup in India. If that wasn’t enough, he also converted his first goal for Flamengo against Bangu recently.

For all his strength, explosiveness and skill, the most impressive aspect about Lincoln is his penalty box movement. Very adept at finding a yard of space, the baby-faced assassin makes sure he’s in the right place at the right time and is unforgiving in front of goal, as the example below demonstrates. Lincoln has stated that Cristiano Ronaldo his idol and, despite not being the tallest, he shares his impressive heading ability. Far from being just a finisher, he has also shown that he can drop deep and provide for others too. 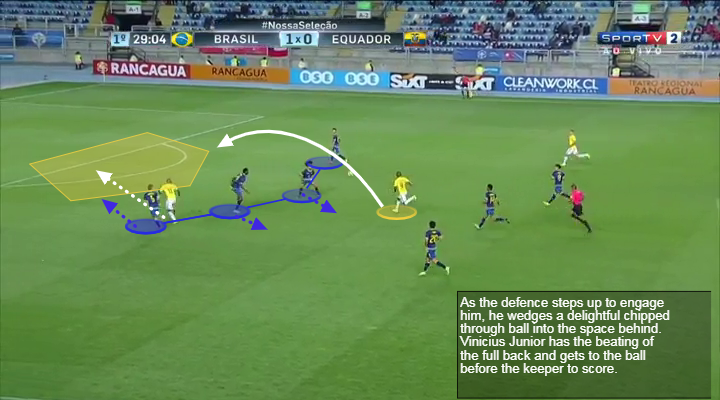 National team boss Tite has been impressed by Lincoln and he is certainly a player that the Selecao set-up will be keeping a close eye on. No doubt, many of Europe’s top clubs will too.

Goalkeeper is traditionally a position that takes longer to develop so predictions at this age are always tough. Only a few keepers in world football, such as Donnarumma, Svilar, Lafont or Farinez, start for big clubs while in their teens and as such many emerge at a later date.

With that in mind, it may be a while before we see Gabriel Brazao but the Cruzeiro stopper is nevertheless one of the country’s best prospects between the sticks. Named best goalkeeper at the U17 World Cup, Brazao made 29 saves during the tournament in India and put in big performances against Mali, Spain and North Korea. Already 1.91m, Brazao is an imposing figure and has a reputation as a penalty saving expert. He also boasts great anticipation, as well as sharp reflexes and a fearlessness to throw himself as people’s feet – skills which he developed playing futsal from a young age. With a recently renewed contract until 2021, Cruzeiro clearly have high hopes for Brazao and he could well go on to become the long-term heir to club legend Fabio.

Yet another of the Brazil U17s fearsome forward line, the nimble, fleet-footed Brenner took advantage of Vinicius Junior’s injury to score three times in seven games at the U17 World Cup. Having been used as an impact sub during the Sudamericano, he justified his selection with a brace against Honduras and a strike versus Niger as the Selecao claimed third place.

Boasting a phenomenal record of 76 goals in 67 games at youth level for Sao Paulo, Brenner is one of the more experienced members of this list, having also scored in last year’s Brasileirao. The kid from Cotia may have only turned 18 in January but has started the year strongly, becoming the first Sao Paulo to score three times in his first six official starts.

Usually found cutting in off the left-hand side, Brenner has searing pace, good dribbling and a knack of getting in goal-scoring positions. However, far from being just a speed merchant up front, he has other strings to his bow such as his decent range of passing. Cutting in on his favoured right, he loves to ping long accurate crossfield balls, such as the example below, which ideal for quickly switching the focus on an attack. With a release clause of €50mil and a bevy of clubs chasing his signature, this year should prove to be an interesting one for Brenner. Will he kick on and follow in the footsteps of former Sao Paulo graduates like David Neres and Lucas Moura or will he go the way of prospects like Ademilson who never quite lived up to the hype?

Just when you think that Santos can’t possibly produce any more young strikers, along comes the next one. Kaio Jorge, the heir of the heirs apparent, is the third Peixe prospect in this series and despite only turning 16 in January is already creating quite a buzz.

Born some six months before Brazil’s last World Cup win in 2002, Kaio Jorge moved from the north east of the country to join Santos’ famous academy and was signed to Puma from a young age. Having impressed for the Brazil U15s, Kaio was then called up to Santos’ Copinha squad and matched Neymar’s achievement of scoring in the tournament aged just 15.

A mobile centre forward with excellent technique and skills, Kaio finishes well off both feet and possesses good pace and intelligent off the ball movement. On top of his obvious striking abilities, he can create opportunities for others and has the invention to pull off something special that sets him apart from the crowd. 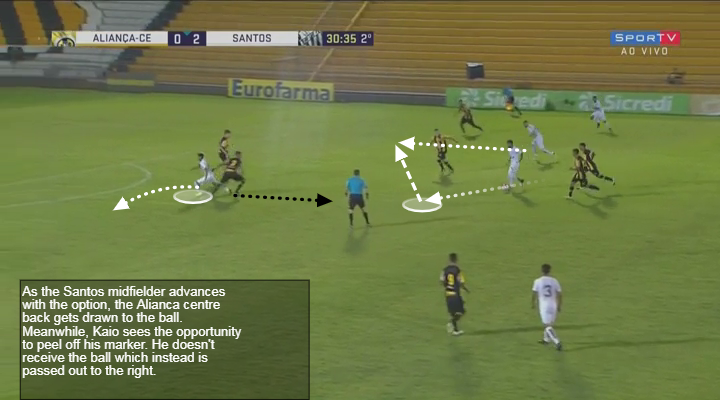 It’s too early to predict just how good Kaio can be but he seems to have the raw attributes to make it. He also shares the same agent as David Luiz and Richarlison so expect him to be linked to some big clubs in the years to come.