From time to time a player comes through that appears destined to play for a certain club, the way that the player moves and acts on a field is just so in keeping with the style and ethos of the club in question that it seems preordained that he will fit there.

That is how I feel whenever I see Frenkie De Jong playing for Ajax. A 20 year old midfielder, De Jong is not actually a product of the famous Ajax academy but was signed at the beginning of the 2016/17 season from fellow Eredivise side Willem II. De Jong already looked a star in the making when starring for Jong Ajax throughout last season and former coach Peter Bosz started to expose the midfielder to first team football towards the end of the campaign. When given his chance in the first team De Jong continued to show his potential as he regularly impressed onlookers with his blend of control and vision.

Now, with the 2017/18 season almost upon us it looks as though De Jong will play a much bigger role with the first team squad, the new coach who replaced Bosz was announced as Marcel Keizier, an internal appointment with the new coach having been in charge of Jong Ajax last season. This sense of familiarity should benefit De Jong as the season progresses given the coaches knowledge of the strengths of the young midfielder.

Whilst De Jong does not tend to accrue large amounts of goals or assists his skillset leans more towards the creation and the exploitation of space, in this sense De Jong reminds me of a young Luka Modric with his intelligent movement dragging defensive players out of position and creating space for his teammates to move in to. To this end De Jong excels in his build up play where he constantly shows for short passes in to teammates before looking to progress the play up the field.

The ability to pull together build up play in the attacking phase could prove key to Ajax as the seasons progress and teams look to defend in a low block against them.

In keeping with the Luka Modric comparison that I have already made above De Jong is superb when travelling with the ball at his feet in breaking the lines of the oppositions defensive block and moving the ball forwards to team mates.

Breaking the lines is a term giving to a pass or dribbling action in which the ball is progressed past a line of opposition pressure in their defensive structure. 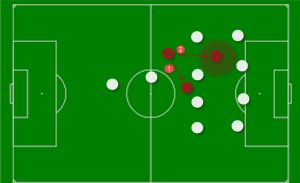 Here I have recreated a positional situation to show clearly my definition of breaking the opposition lines. There are to passing options for the red player in possession of the ball. Option one is a short pass to a player who is positioned in front of  the oppositions midfield line. The second option is a pass that goes between the midfield line and finds a player in space.

The first passing option could be used effectively against a team sitting in a compact defensive shape, the pass would be used to provoke the defensive players to move and and engage the ball, this creating a weak point in the compact structure.

Option two however, the pass between the lines, offers the best outcome for a team looking to progress the ball through the thirds of the field.

Frenkie De Jong is extremely effective in executing the pass around the corner of the defenders of through the lines, he is a creative passer who disguises his intentions well with body shape and positioning.

Here we see De Jong in possession of the ball as he carries the ball forwards towards the oppositions defensive block. As he gets closer to the point that he will be engaged by the defensive players we see the young midfielder open up his body before sliding the pass through the midfield and defensive lines to find Kluivert running in to space in the wide areas.

This ability to not only identify the passing lane but to execute the pass with the correct weight and length is key to the modern midfield player.

This time we see the ball break to De Jong in a relatively congested midfield area, immediately when taking possession of the ball the young midfielder looks to progress the ball forwards in to dangerous areas of the field.

With the slightly ‘messy’ structure from both sides in midfield there is an imbalance in the opposing sides defensive structure and the opportunity to play forwards and split the lines is present, De Jong immediately slides the ball out in to the wide area to release a player running in to space.

In keeping with the portrait that I’m painting in this ability to play the ‘key’ pass that comes before the assist is somewhat of a trademark of De Jong.

As well as being able to play the pass that breaks the opposition sides defensive structure and creates opportunities for his team De Jong is equally comfortable in linking the play as he looks to constantly provide the passing option for his teammates when in possession of the ball.

For a side like Ajax this linking player can be key in their attacking game model, the ability to not only keep possession, which is an added benefit, but to shift the opposition defensive block and vary the pace and depth of the build up is extremely important.

In this clip we see Ajax transitioning in to their attacking phase, De Jong is almost omnipresent in the attacking move. He is constantly the player who is showing for a pass to allow a teammate to escape pressure or change the angle or depth of the attack. He moves from the left side to the right side showing balance and equal ability on both feet, when he takes possession from a pass he does so on his back foot, this allows him to open up his body and expand his area of vision in one movement.

Ability to recover the ball

As important as it is for a midfield player to be able to link play and play progressively in the modern game it is perhaps equally important that they are comfortable in contributing to the defensive phase.

Under Peter Bosz, and as early signs suggest under Marcel Keizer, Ajax play a proactive defensive system where they press in key areas when triggered, they do not tend to play in a deep compact block and instead trust the individual player to use their body positioning and shape to protect passing lanes.

Frenkie De Jong is not a natural defensive player but he is capable and confident in tracking back to recover possession of the ball.

Here De Jong shows a willingness to get involved with the physical side of the game. The opposition midfielder is moving across the width of the field in possession of the ball as De Jong comes back from an advanced area, his tackle is strong but well timed and possession is won back from the opponent.

Key however is that having won the ball back De Jong is immediately signalling that he wants possession of the ball as he moves back in to advanced areas.

In this match against his old side Willem II we see Frenkie De Jong moving to recover possession once again. The opposition have just regained possession close to their own penalty area and are looking to transition forwards. In the immediate transition Ajax quickly counterpress with three players converging on the opponent in possession and De Jong is the player that executes the challenge on the ground and wins the ball back.

Once more we see De Jong then look to drive forwards to take advantage of the opposition being caught out of position.

There is little doubt in my mind that Frenkie De Jong is going to be one of the breakout talents in football this coming season. His combination of pace, technique and vision make him an exceedingly interesting prospect in the centre of the midfield, the capacity to beat a player one on one to create space or to pick the correct passing lane to break the defensive structure of the opposition presents an intriguing profile going forwards.

In the wake of the devastating news that Abdelhak Nouri will never play football again following his collapse in pre season we should see more first team minutes for De Jong, given the regard that Nouri was held in by the club and supporters it shows that De Jong is well thought of that he is seen as a natural successor in the first team squad.

If De Jong can become a first team regular then I would expect the national team to move to call the midfielder up sooner rather than later.