Going into this top four clash both teams were level on points with a place in Europe on the line. The top four race has been hotly contested since January and there are five teams fighting for two spots behind Manchester City and Manchester United.

Chelsea began the season full of life and optimism under Frank Lampard, the Chelsea legend had been handed multiple million pound signings and the mood at Stamford Bridge was that this investment would see at least one trophy make its way to the London club this year. Unfortunately after a bad string of results during the festive period, Lampard was relieved of his managerial duties and Thomas Tuchel was appointed. The former Borussia Dortmund and Paris Saint-Germain coach had left his previous stints in France and Germany with a lot of noise about his altercations with the club hierarchy. Coming in to “save” Chelsea mid season is a difficult task, but it has been one the German has thrived under; he has suffered only 2 defeats as manager in 21 games, his Chelsea side have conceded only 9 goals in all competitions and have won a massive 47 points under the German.

David Moyes has been one of the most underrated stories in the Premier League this season. First off, he has West Ham in a top four race with 5 games to go till the season ends, and has been able to go on that run despite his key players missing out during that stretch. Surprisingly there were calls to sack Moyes from the London Stadium early on in the season as he began the campaign with 3 losses in 5 games, then he tweaked the team’s setup and went on an impressive run in the league; taking points off Pep Guardiola’s Manchester City and Jose Mourinho’s Tottenham Hotspur side. Moyes transformed the Hammers into one of the most exciting teams to watch this season with Declan Rice and Tomas Soucek dominating midfields and Michail Antonio tearing defences apart up top.

Two managers who found themselves in surprising situations near the end of the season clashed at the London Stadium with bragging rights and a place in the Champions League on the line. Let’s take a look at how both managers set up their teams.

Chelsea set up in their usual 3-4-2-1/3-4-3 system with a back three, a pair of wingbacks, a midfield pivot of Jorginho and Kante and two forwards (Mount and Pulisic) flanking a lone forward (Timo Werner). Thiago Silva returned to the lineup and Azpilicueta was deployed in a wingback role rather than the third center back position he has often been used in under Tuchel. 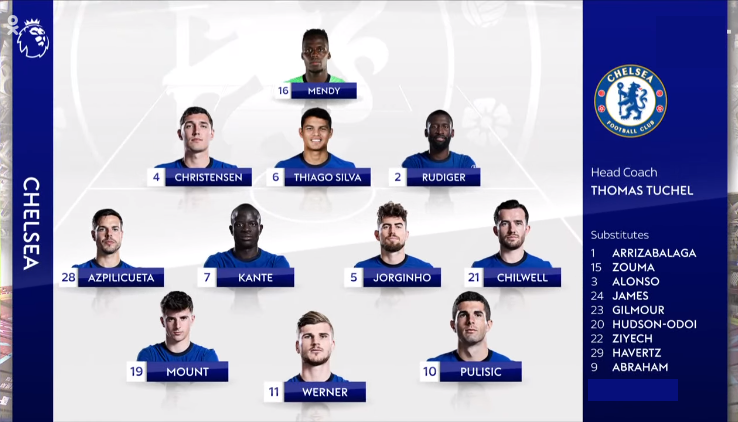 Tuchel’s system is one that marries pragmatism and positional play, emphasis on holding the ball, controlling the game and progressing the ball through the thirds with combinational play. Defensively, the system was also proficient, it provided extra bodies at the back during the defensive phase as well as offering protection with the midfield pivot, allowing the forwards to have a bit of attacking freedom.

West Ham started the season using a standard 4-2-3-1 but shifted to a 3-4-1-2 when injuries hit the team, forcing a change in personnel and tactics. With West Ham’s injuries growing by the day nearing the business end of the season, Moyes had to call on Ryan Fredricks, Mark Noble and Fabian Balbuena to step in for Aaron Cresswell, Declan Rice and Michail Antonio. 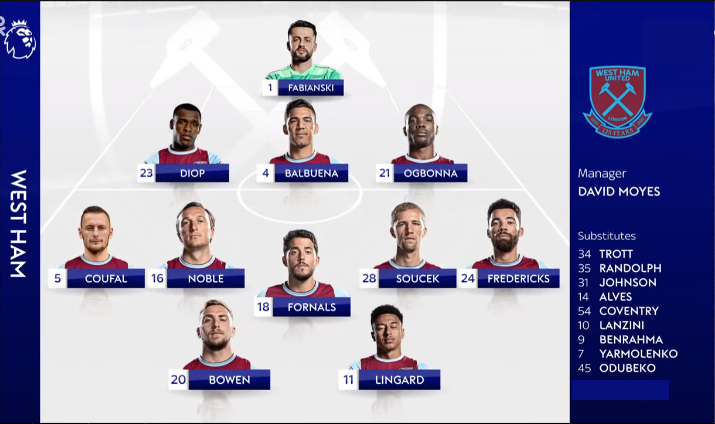 David Moyes’ team utilized a more counter attacking based style, playing to the strengths of the team. They had very good ball winners in Declan Rice and Soucek, flying wing backs Coufal and Masuaku and a very dangerous front line usually consisting of Antonio, Bowen and Lingard. The transition based style has seen Antonio and Lingard thrive this season with the duo combining to score 16 goals for the hammers this season.

The game was a tightly contested affair with both teams coming out of the gate with caution, throughout the game there was no risk taken near the team’s goals but later on as the game flowed, Chelsea’s dominance on the ball showed. Tuchel’s side averaged more possession (55.5% via Whoscored.com), had more passes (556) and shots on goal too; West Ham failed to record a single attempt on target in the box, while Chelsea managed 4 shots on target from inside the box. The Blues were the more dangerous team on the day.

Both teams were evenly matched for most of the game but surprisingly their best chances came from counter attacks and transitions, and the attacking quality of Chelsea was enough to convert their chances into goals. West Ham could not break down Chelsea defensively and their best opportunities came from set pieces, Lingard and Bowen struggled to pose any serious threat to Tuchel’s Blues in the absence of Michail Antonio.

Chelsea on the ball attacked with the wingbacks high and wide with the three attackers moving in between the lines, the shape similar to a 3-2-5 in the final third of the pitch, with the double pivot of Kante and Jorginho, and the three center backs providing defensive support on transitions. Chelsea aimed to penetrate West Ham’s line of 5 defensively using quick one-twos and line breaking passes; Mount, Pulisic and Werner constantly interchanged positions drawing their individual markers out enough for runners in behind and out wide.

West Ham altered defensive shapes depending on the areas Chelsea possessed the ball, during Chelsea’s build up, West Ham pressed Chelsea’s back 3 and Mendy with their front three; Lingard and Bowen split the difference between the centre backs with Fornals covering the space in front of Chelsea’s midfield duo. 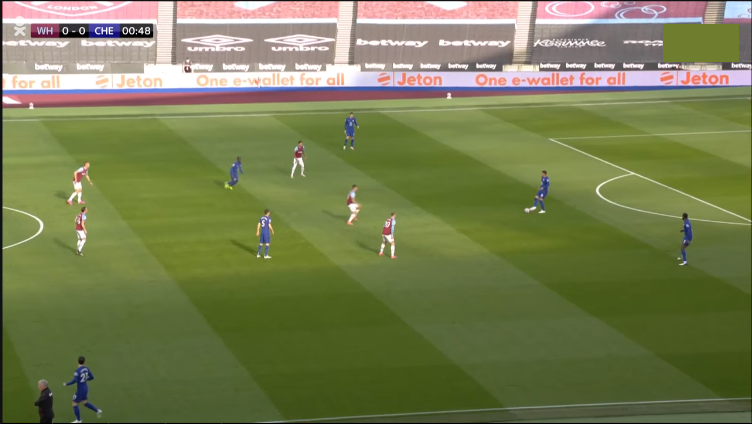 The Hammers switched between 5-3-2 and 5-4-1 with a strong emphasis on crowding the ball holder. Bowen and Lingard were instructed to force the defence to push the ball wide, and Fornals moved to balance the pressing shape; either joining to make a 3-man press or falling back to the far side of the midfield to prevent a switch of play to the opposite wingback. Anytime the press was bypassed high up the field, the team would drop back into a more familiar 5-4-1 block to counter Chelsea’s 5 man attack, with the wingbacks marking Chelsea’s wingbacks and the back three keeping tabs on Mount, Werner and Pulisic.

West Ham, however, did not allow Chelsea to press them from goal kicks, according to fbref.com, Fabianski launched 83.3% of his goal kicks more than 40 yards. This meant Chelsea had very few opportunities to win the ball high up the pitch, a move I suspect was intentional from David Moyes.

To beat West Ham’s press, Chelsea encouraged Jorginho and Kante to have more distance in between them rather than being close to each other during build up. This meant if one dropped deep to receive the ball, the other would position themselves behind the West Ham press to receive the ball quickly, turn and play passes to break the lines.

The staggered line of Kante and Jorginho made it harder for the markers to close the passing lanes to both midfielders. This was key in Chelsea scoring the only goal of the game: 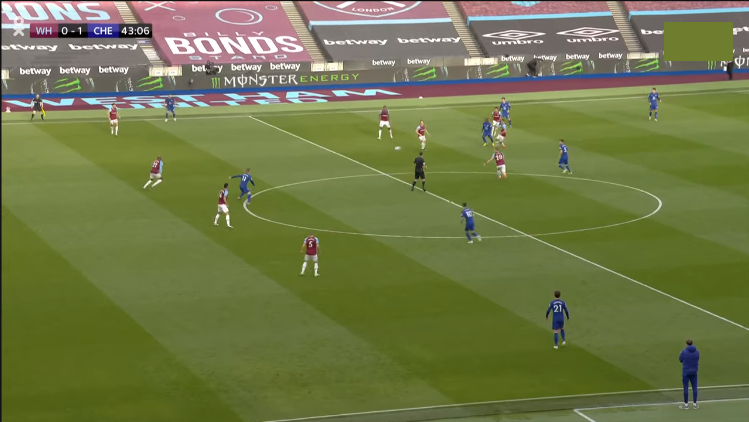 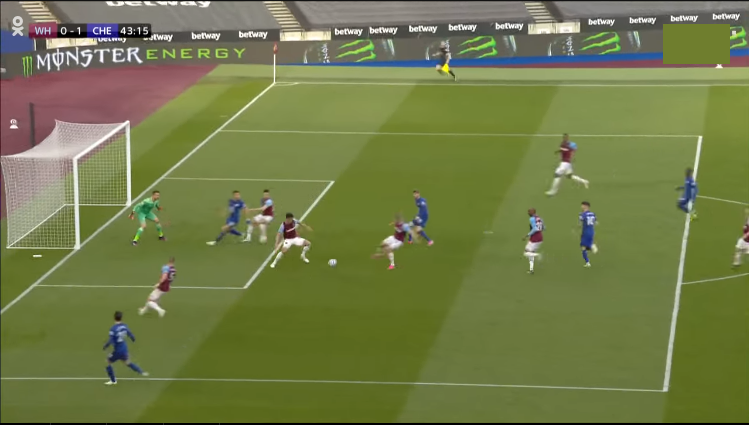 In the sequence above, Kante received the ball behind West Ham’s press, turned and quickly played a pass into Timo Werner’s feet, the German then held off a defender and layed the ball to Pulisic who was able to find Chilwell in space on the left flank. Chilwell’s run produced a great cross which found Werner in space to finish off a swift counter attack.

Lingard and Bowen operated as split strikers during the game in the absence of Michail Antonio, West Ham’s main attacking threat. The duo played different roles in attack with Lingard dropping deep during attacks to pick up the ball and drive into the final 3rd, while Bowen’s role was making runs into the channels between the Chelsea defence. West Ham did not have much of the ball during the game and as such most of the shots they managed were from set pieces and attempts from long range. 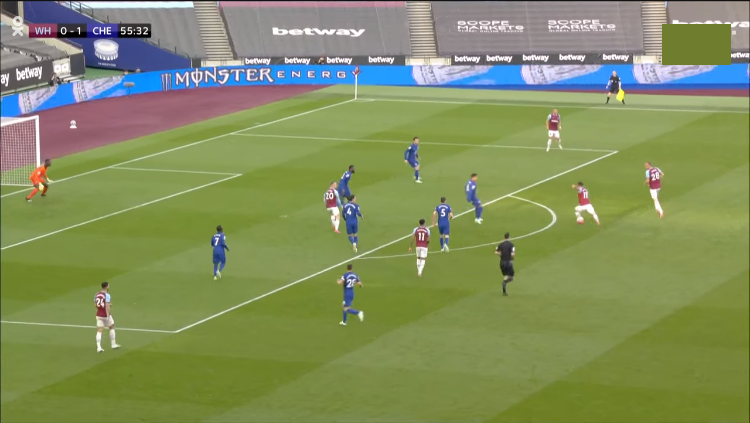 Pablo Fornals was also crucial to Moyes’ gameplan, off the ball he was tasked to press and disrupt Chelsea’s midfield pivot on the ball, during attacks, he often made late runs into the box while the Chelsea defence had their hands occupied with trying to shut down Lingard and Bowen. According to fbref.com, Fornals completed the most tackles out of all the West Ham attackers (2 Tackles won) and had the most pressures in the team (24).

It was a tightly contested game by two sides with Champions League aspirations, and was decided by a single goal resulting from Chelsea breaking West Ham’s press high up the field. In games like this, it takes margins to determine a winner; a mistake from a player, a miscalculation, a set piece, or in this case, a very good press being bypassed by high quality play.

With 5 games to go till the end of the season, West Ham are still within touching distance of Chelsea. The Blues seem to have a more difficult run till the end of the season, aside from their Champions League clash with Real Madrid and their FA Cup Final against Leicester, the Blues will face Man City, Arsenal and Aston Villa. West Ham on the other hand, have Brighton, Burnley and West Brom on their schedule but with Antonio, Creswell and Declan Rice out injured, it will take a huge effort for Champions League football to grace the London Stadium.