Manchester United and Villarreal squared off in the 2020/21 Europa League final on Wednesday night. Two sides from different ends of European records, with United having multiple European trophies to their name while Villarreal’s only European triumphs came in the Intertoto Cup competitions in 2003 and 2004. The two opposing managers too were from different worlds; Unai Emery the Europa League specialist was facing Ole Gunnar Solskjaer, who was in his third season in charge of Manchester United after a successful stint as caretaker. The only European competitions Ole has won came in his playing days with Manchester United, but as a coach, he is yet to make his mark on the big stage.

Manchester United were coming into the final off an amazing third season under Solskjaer where they finished comfortably in second place, securing Champions League football. United also reached the quarter finals of the FA Cup and the semi finals of the EFL cup, both times losing to the eventual winners of the competition; Manchester City and Leicester City respectively. They performed well in the league and set a record, going unbeaten in their 19 away games in the Premier League.

Coming into the final, the atmosphere around the club was that  this was finally the year for some silverware, their Europa League campaign was smooth, as the team cruised to the final, scoring 18 goals in the knockout rounds. Their fast-paced attacking style was no match for the teams in the competition, as they brushed aside most of the teams.

Villarreal started their La Liga season with a lot of promise, losing only 2 of their first 22 games. Near the midway point of the season, Villarreal were challenging for a Champions League place. Unai Emery’s solid pragmatic style was able to help the team grind out a lot of slender wins and draws in games they looked like they would lose. To call Emery’s team pragmatic would be disrespectful to some of the great attacking performances they showed in the season. Villarreal were the 4th highest top scorers in La Liga with 60 goals, 7 behind Real Madrid and Atletico Madrid.

As an infamous Europa League specialist, the Spaniard manager lived up to his reputation, Villarreal advanced to the final of the competition unbeaten throughout the group stage and the knockout rounds, conceding just 8 goals in the process. This season’s competition looked like a redemption story for Emery; after getting an unfancied Arsenal side into the 2019 final before he was sacked. He dispatched Arsenal in the semi-finals, so it looked like the stage was set for him to prove the fans and the club wrong by bringing Villarreal their first European trophy in over a decade.

Both sides had big talking points ahead of the clash, with Man United missing their Captain Harry Maguire due to injury. The question of the midfield pivot he would use in the final was also a talking point, as Solskjaer had played Paul Pogba as an attacker in the last few months. The goalkeeping dilemma was also present, as both David De Gea and Dean Henderson had both done enough during the past few games to secure a starting spot in the final.

Manchester United’s major change from their regular formation was shifting Pogba from wide left back into a midfield pivot. We will discuss why Solskjaer opted for that change later in the analysis. No Maguire meant Bailly would partner Lindelof at center back with McTominay and Pogba in midfield and Greenwood, Rashford and Cavani upfront.

Villarreal were missing Samuel Chukwueze for the final, the Nigerian winger was one of the main outlet’s of their system as he was able to dribble and carry the ball for many yards during transition. His injury meant that 18-year-old Yeremy Pino made his first ever appearance in a European cup final

This final was a clash of similar but contrasting styles, both teams were very much transition-heavy sides but the difference was on the ball and off the ball; with Villarreal being a very stubborn defensive team who could frustrate opponents through 90 minutes and United who had improved massively in possession and keeping the ball.

Early on in the game it became very apparent what Villarreal planned to do. Since United’s left side of Shaw, Pogba and Rashford was their major mode of attacks and ball progression, Villarreal sought to snuff out any attempt to progress the ball down the left flank, pressing very high anytime Luke Shaw received the ball in the build up.

In contrast to the right flank where Greenwood and Wan-Bissaka lacked the ability to hold on to and progress the ball down that flank. Hence Villarreal forced United to switch play to the right side of the pitch where they knew the danger posed but the fullback-winger pairing there could be contained with ease.

In the passage of play below, keep an eye out on how Villarreal’s structure and shape shifts from left to right; on the left they press high on Luke Shaw and block the passing lanes to Pogba and Rashford. This opened up the diagonal to the right flank where they intentionally left Wan-Bissaka open and only closed him down once he had crossed the halfway line.

Aside from that, Villarreal always made sure to ‘cage’ United’s midfield pivot, preventing easy penetrating passes and forcing United to go to the fullbacks to progress the ball.

United on the other hand forced Villarreal to move the ball to wide areas before aggressively closing them down, using the touchline as an extra defender. In the image below, as soon as the ball reached Villlareal’s left flank, Wan-Bissaka pushed up to meet him, with McTominay closing down the winger and Eric Bailly squeezing the space in behind to prevent long balls.

In central areas, United pressed in a 4-4-2 shape with Bruno pushing up to join Cavani in the first line of the press, the wide players would pick up the two fullbacks but when the ball was on one side of the pitch, the winger on the far side of the pitch would press the free man to prevent any switch of play.

Villarreal defended in a very deep and compact 4-4-2 block, with the wingers and fullbacks preventing any sort of penetration within the central areas, Capoue was also instructed to mark Bruno Fernandes out of the game and thus United lacked any threat between the lines.

United sought to counter this by dropping Pogba deep to force one of the Villarreal midfielders to follow him and leave a hole in-behind but Pogba was picked up by one of Villarreal’s front two to prevent easy ball progression.

United’s attacking shape was 2-3-5, with both fullbacks high up the pitch and Greenwood tucking inside alongside Cavani with Bruno drifting in between the lines. To counter this, Villarreal often abandoned the right side of the pitch, encouraging United to give the ball to Wan-Bissaka who is not much of a threat on the ball. United also tried to take advantage of this by instructing Greenwood to drift out to the right more often and combine with the overlapping Wan-Bissaka.

In the early parts of the season, Paul Pogba was unfit and was recovering from Covid, thus his performances in the middle of the park were very unsuitable for the fast paced football United were looking to play. He was slow, lethargic and seemed a step slower on the ball, often giving away cheap turnovers and committing basic errors. To accommodate United’s best player into his system, Solskjaer deployed Pogba off the left, giving him much more freedom on the ball in attacks. High up the pitch on the left, Pogba’s turnovers would not affect the team as much as his turnovers directly in the middle of the park did.

Pogba’s best abilities are his ball carrying and passing, two weapons he used to devastating effect during Manchester United’s run of form in December. On the left, he would come inside and combine in central areas with Bruno Fernandes and Luke Shaw, his passing ability often unlocked Greenwood and Rashford making runs in behind on the right flank. 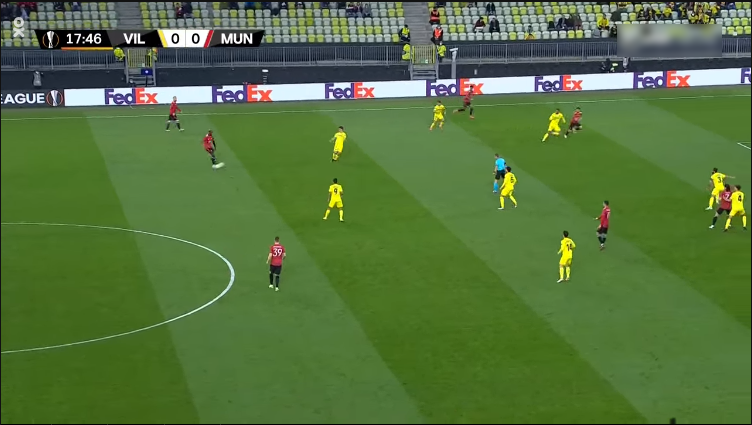 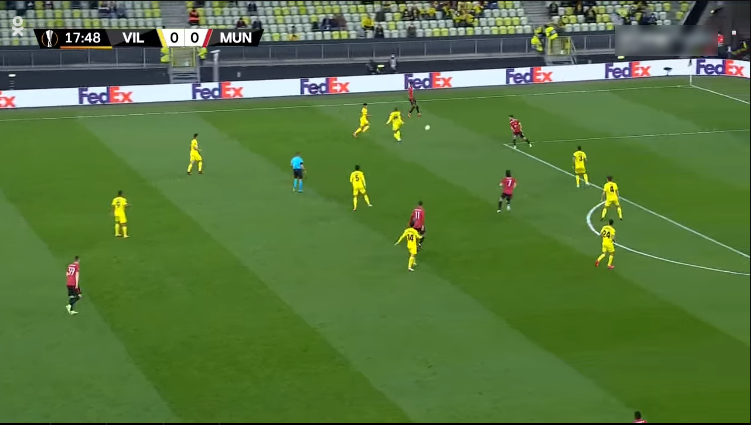 After Villarreal conceded the equalizer, Unai Emery took off Carlos Bacca and brought on Coquelin. This effectively killed off the game and brought balance, Villarreal were under wave after wave of attacks before the goal and the introduction of Coquelin was the remedy. They switched to a 3 man midfield rather than the pivot, with a shift to a 4-5-1 effectively matching United man for man in midfield and stopping any threats. This change forced many of United’s players to come and pick up the ball from deep areas to try and create something with the clock winding down after each attack.

There were a lot of arguments post-match. Any game that goes to a penalty shootout is hard to predict as penalties are largely a game of chance. A set of fans claim Ole starting all four of his attackers at once cost him the game, as later on when they were searching for a winner, there was no true game changer off the bench. Others argued that his in-game tweaks failed as Unai Emery got the better of him throughout the 180 minutes.

Personally, I think United’s failure comes from Solskjaer not being able to react. He noticed Emery’s game plan to shift United’s attacks down the right but failed to make the small adjustment of bringing Daniel James or moving Rashford across onto the right. When United were looking for the winner, he still had Pogba in midfield where he was barely affecting the game rather than playing him off the left where he has been influential this season.

When it comes to cup finals, sometimes it is not how you prepare to go to battle, adapting to the tide and changing it may be the best way to victory.