Chelsea vs Real Madrid. Zinedine Zidane vs Thomas Tuchel. A clash that would have made Super League fans proud of the action on display. Both teams came into the Champions League semi-final with different aspirations; the “underdog” Chelsea made the semi-final but their spot in European competition next season has not been guaranteed in the Premier League. Real Madrid however, are in a four team title race with less than 7 games to go in La Liga.

Thomas Tuchel came to Stamford Bridge mid-season and has revamped how the London Blues have competed, moving from the more erratic, unpredictable style of Frank Lampard to a more measured, possession approach under Tuchel without losing their ability to be impactful on transitions. Under the German, Chelsea have solidified their defence with a new shape, and the organization has helped to make the team more stable in and out of possession.

Zidane had many Madrid fans calling for him to be sacked during the season despite numerous injuries to key players and little to no improvement in the attack during the previous transfer window, the Frenchman has had a good season. Remarkable triumphs over Barcelona and Liverpool showed how flexible Zidane could be. Tactically, the ex-Galactico is a chameleon; he can set up his team in a different number of ways with different personnel to get the desired result.

Chelsea had already overcome stern Spanish opposition in the Round of 16, while Madrid dispatched of Premier League holders Liverpool with relative ease. This game was set up perfectly. Let’s see how the match played out.

Chelsea lined up in Tuchel’s preferred 3-4-3 system, Kante and Jorginho in midfield and Mount, Werner and Pulisic up top. The surprising choice in the lineup was the position of Azpilicueta, who was playing as a wingback rather than the third center back role he had been playing under Tuchel. It turns out this was a tactical decision as we would find out during the game.

Chelsea were very aggressive in this game, with their pressing and counter pressing, while posing a serious threat to Madrid on the counter. A few poor passes and inconsistent decision-making was what prevented the blues from leaving Spain with a lead in this tie.

Madrid switched from the usual 4-3-3 to a 3-5-2, with Rodrygo dropping to the bench. Marcelo came into the lineup and played as a wingback, a move which was very intentional from Zidane, as we will see soon. Kroos, Modric and Casemiro played in the midfield three, with Vinicius partnering Benzema up front.

Madrid started the tie very poorly, and it took the whole first half of football before Zidane’s men showed up for the tie. Defensively they were very shaky, with Marcelo especially causing a lot of defensive issues down his flank. Madrid’s midfield also did not seem to wake up until the second half. In the first half they often found themselves in the wrong positions and it took a lot of adjusting for them to take control of the game.

Madrid in the build up pushed Casemiro high almost alongside Benzema; this was for a few reasons: the Brazilian has struggled on the ball this season and it was a wise decision for Zidane to remove him from deep areas as Chelsea could easily exploit his weaknesses. Also he was the designated out ball anytime Madrid had to quickly play out of pressure, his size and physicality meant he could easily contest aerial balls and hold off defenders.

Modric and Kroos were assigned different roles in the build up and attack. Kroos would usually drop into the center back position to distribute, and this meant Nacho would go wider and Marcelo would drift infield. Modric played ahead of Kroos and in line with Marcelo, with their technical ability on the ball they were able to evade Chelsea’s press a few times. Sometimes Vinicius would drop deep near the left wingback zone to receive diagonals from Kroos during the build up. This all helped to confuse Chelsea’s marking assignments during the press. 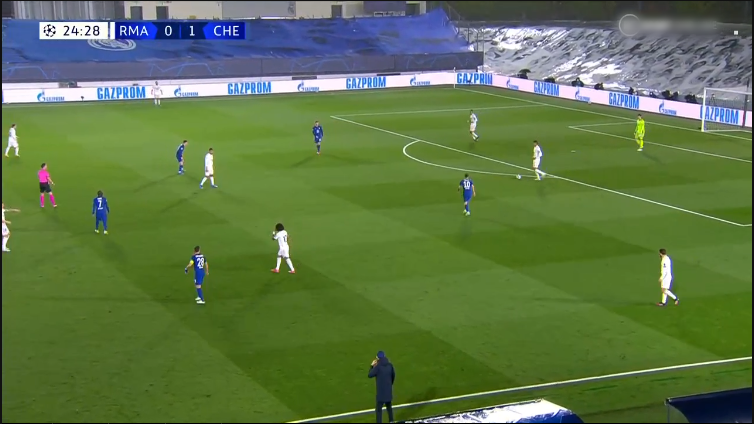 In attack; Madrid had Benzema and Modric in between the lines, with Marcelo tucking in midfield alongside Kroos. Casemiro was also tasked with floating in and around the space in front of Chelsea’s center backs. When Madrid attacked, there was a clear focus on exploiting the left flank; sometimes Benzema would pull wide and Vinicius would occupy the Chelsea defence with runs in behind. In some situations, Nacho would be wide left, with Marcelo just behind him in the central midfield area with Vinicius positioned in the half space.

Madrid’s defensive shape switched between a 5-2-3 and a 5-4-1, with Vinicius dropping off the front two to cover Marcelo on the left, and Modric pushing high to join Benzema in the first line of defence. The 5-2-3 shape was to force Chelsea out wide, and Madrid would revert to the 5-4-1 to defend against Chelsea’s wing play. 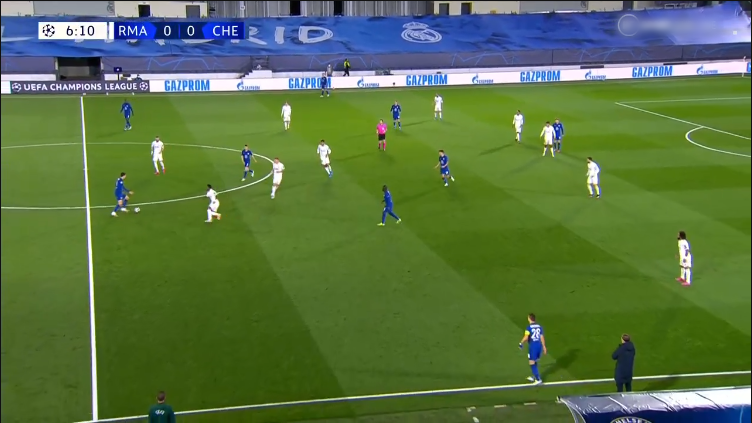 Chelsea press was structured to force Madrid to shift the ball wide, and win the ball by aggressively pushing up the ball-side wingback. In central areas when Madrid had the ball, Werner and Pulisic would push up to counter Madrid’s 3-2 build up and Mason Mount would drop into midfield to provide numbers off the ball. 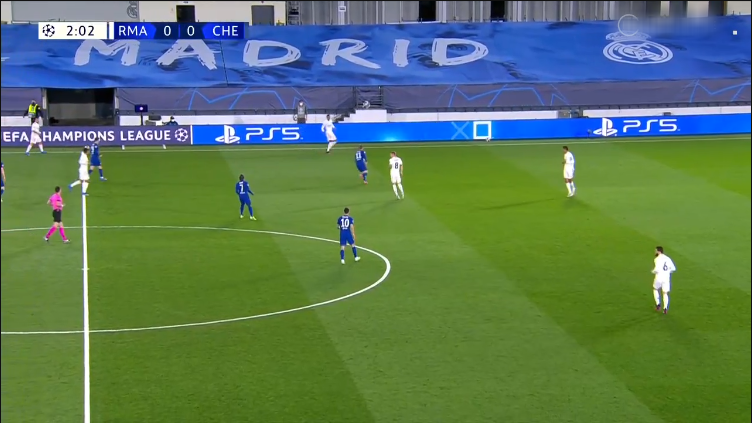 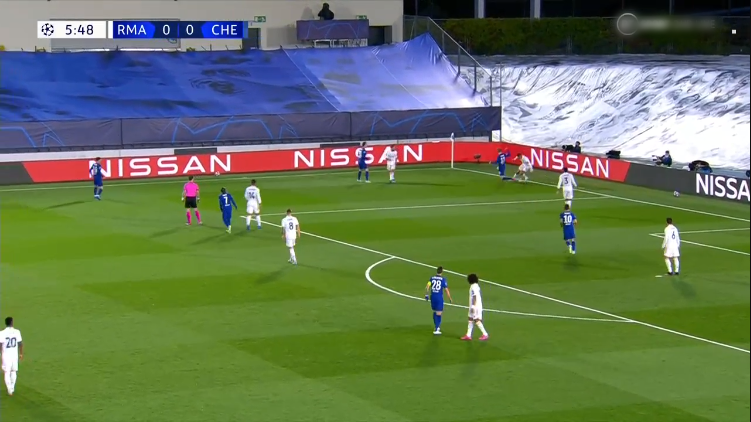 When Chelsea pressed high, they cornered Madrid in wide areas and pushed up to focus on the ball-side of the pitch. The attackers would move up aggressively to cut off all backward passes while Chelsea’s midfielders tracked Madrid’s midfielders.

Madrid also pressed, with a line of four at the front: Modric would join Benzema and Vinicius and Carvajal would be positioned to cut off any passes into the wingbacks, Kroos and Casemiro had the task of marking Kante and Jorginho anytime they looked to have options. Los Blancos did not press as intensely as Chelsea but it was enough to stifle Thiago Silva and Jorginho in the build up, the latter looked completely lost throughout the game in contrast to his midfield partner, Ngolo Kante. 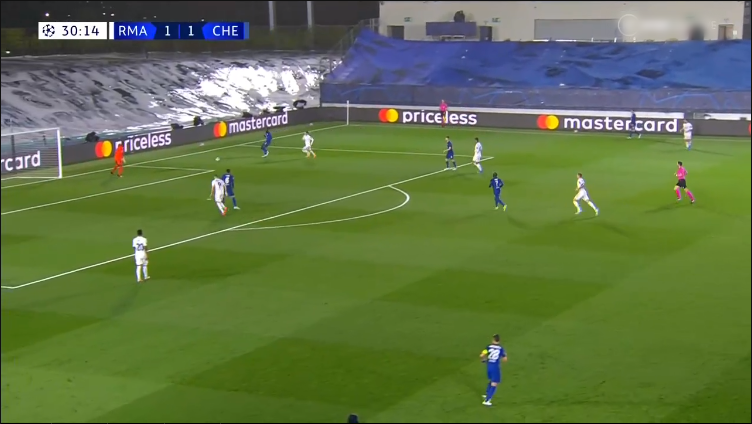 Chelsea attacked with their wingbacks high and wide with Mount, Werner and Pulisic offering options in between the lines. Mount would also join in the attack to try and outnumber Madrid’s back three. In the build up, the center backs would push the ball into Madrid’s half to try and force one of Madrid’s midfielders to commit and open space for Chelsea’s attackers. 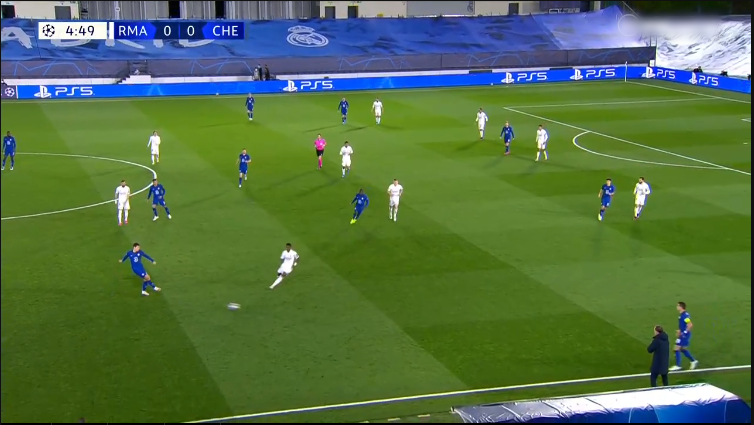 One peculiar thing was the roles of the two captains; Marcelo and Azpilicueta, played on the night. Tuchel tested Azpilicueta’s role against West Ham, and Zidane deployed Asensio in a similar role against Real Betis.

On the ball, Marcelo was instructed to invert into midfield areas, during attacks he would combine with Nacho and Vinicius to overload the left flank and he did a very good job there. Defensively, he won loose balls and was secure in possession to retain Madrid’s attacks. Defensively when he was at the wingback position he was awful, he failed to step up for Pulisic’s goals and at times completely lost his assignment (Pulisic/Werner).

Azpilicueta also had the daunting task of being stuck one-on-one against Vinicius, who had a field day against Trent-Alexander Arnold in the Liverpool game. Defensively, Azpi more than held his own against the Brazilian. It was his role offensively that he could not execute, Chelsea’s plan was to overload the left flank before switching play to Azpilicueta. But with his lack of pace, it was difficult for him to time his runs, even when he got the better of Marcelo offensively, he just did not have enough to reach the ball.

Their heatmaps below give you a sense of how they played their roles with the instructions.

Tuchel made a triple substitution and brought on Ziyech, Havertz and Reece James. It seemed like a good move to bring on fresh legs in attack as well as bring a more defensive option at Right wing back when Zidane brought on Eden Hazard earlier.

Zidane also responded by replacing Carvajal and Marcelo as he sensed Chelsea would attack wide and take advantage of the tired legs of his wingbacks.

The changes effectively canceled themselves out and the game became more of a stalemate than it was in the first half. Madrid sensing that Chelsea would go for it in the final minutes, killed the game slowly by retaining possession till the final whistle.

This big clash between two teams who perform well in Europe started off with a hot start from Chelsea, Madrid could not live with Chelsea’s press and lost the ball multiple times in the first half. Tuchel was also wise to let Pulisic and Werner target Marcelo on the left flank as he is very shaky defensively. Modric, Kroos and Casemiro were all over the place and could not handle the direct running of Mount and Pulisic in midfield.

Zidane who grows his tactical reputation every week, showed why he is one of Europe’s best. He made a few adjustments in the game, and by the second half the Madrid side was more dominant and forced Chelsea to retreat. Even though Madrid had a blunt attack, every time they had the ball, they looked threatening.

Zidane must keep this at the back of his mind ahead of their second leg at Stamford Bridge. Chelsea have an away goal so there’s everything to play for when the teams meet in London. But with Tuchel side’s stubbornness in defence, Madrid are at risk of losing the tie if their attack does not come to life.