Pep Guardiola had a 13-1 Win-Loss record in cup finals ahead of Manchester City’s Carabao Cup final against Tottenham Hotspur. The only manager to have ever beaten Guardiola was Jose Mourinho, who would have been in the Tottenham Hotspur dugout on Sunday if his team was not demoralized and on a poor run of form ahead of the game. So how did we get here?

Manchester City actually had a slow start to the 2020/21 season, with many key players injured and a bunch of the squad recovering from Covid, Pep was forced into starting the season with a new system; a 4-2-3-1 which was a huge shift from his favourite 4-3-3 system. It took Man City a while to get into rhythm as they neared the end of November they had only recorded 3 wins in 9 games; their scoring output was low and the defence was an issue. This forced Pep to go back to the drawing board again, this time he came up with an unusual 4-3-3 system that operated without a striker. The shape would change into a sort of 3-1-3-3 in game. That sparked City to an amazing run which pushed them to the top of the league by February and as it stands they have reached one cup final, and are looking forward to the elusive Champions League Final.

Tottenham on the other hand started the season on fire, despite an opening day loss to Everton, the Spurs went on an 21 game stretch where they only lost one game. Spurs were top of the league by Christmas, but that all spiralled out of control as they fell to 6th in the table, were knocked out in both the FA Cup and the Europa league but they had hope of winning the Carabao cup.

It was not Mourinho who would lead the Spurs army to Wembley, but rather a more familiar face to Spurs fans; Ryan Mason. The 29-year old retired from football due to injury, the midfielder was a very promising player who came through the Spurs academy but had his career cut short by unfortunate events.

The stage was set for the Cup final: a veteran coach of over 10 years against a rookie coach who had been in charge for less than a week, before that Mason was as a director of youth for the club. How did the final between the veteran and the beginner go? Let’s find out.

On paper Tottenham set up in a conventional 4-2-3-1 system with Winks and Hojbjerg operating as the double pivot in midfield and Lo Celso in the hole behind a front three of Harry Kane, Son Heung Min and Lucas Moura. The obvious surprise in the lineup was the exclusion of Tanguy Ndombele and Gareth Bale who were both instrumental in Spurs’ 2-1 win against Southampton just before the weekend.

Spurs did not stray too far from how they played under Mourinho but there was a bit of change in shape off the ball, and some new rotations in the system. 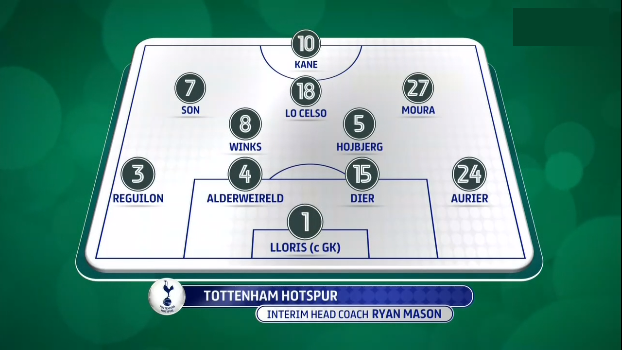 After crashing out 1-0 to Chelsea in the FA Cup semi final just under a week before this game, Pep Guardiola decided to go with a stronger side than he played against Thomas Tuchel, he did not rotate much and the only changes were Zack Steffen stepping in for Ederson, Laporte for the suspended John Stones and Sterling keeping his place in the lineup despite his inconsistent form 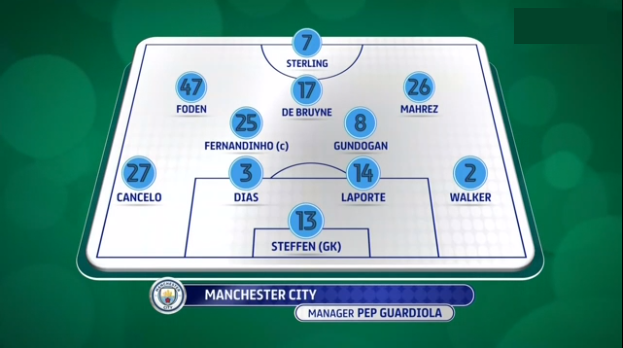 The match was what you would normally expect from a final; both teams were cautious from the start, with Man City possessing a huge share of the ball, but Tottenham were able to create decent situations where they could have scored but the decision making on the day was very poor from both teams.

Tottenham only managed two actual shots in the 90 minutes which was very surprising as they carved out decent opportunities to shoot but Son, Kane and Moura were uncharacteristically poor in the final third. According to whoscored.com, Man City outshot Spurs 21-2 with the North London side only recording one effort on target.

Pep Guardiola rolled out yet another interesting tactic, it is not new as he has used it in the past, notably against Manchester United in the 2018/19 season. On paper, it was a normal 4-3-3, but on the pitch it was more of a 4-4-2 shape. The spin was that there was no natural striker, as Kevin De Bruyne and Phil Foden, two players who often play wide and in midfield areas were deployed as a front two. They were two false 9s up top with Sterling on the left, Mahrez on the right and Fernandinho and Gundogan in midfield. 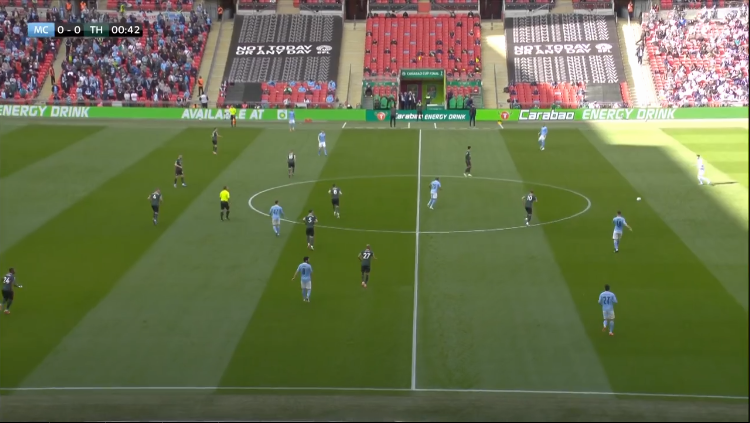 Spurs also set up in a 4-3-3 but they played it as more of a 4-2-4 shape, with Lo Celso having a dual role of supporting the midfield during the defensive phase and joining the attack in the final third.

City’s press was by far the telling factor in this game, they forced many turnovers early in the game and would have been out of sight by the first half if only their attackers had composure in front of goal.

Spurs’ build up involved the back four, with the fullbacks hugging the touchline, the midfield two of Hojbjerg and Winks would drop facing the goal to receive the ball to attempt to break the press and feed Kane, Son and Moura in behind the City defence. City countered this by pressing in the 4-4-2 shape, with Foden and De bruyne pushing to disrupt the build up. 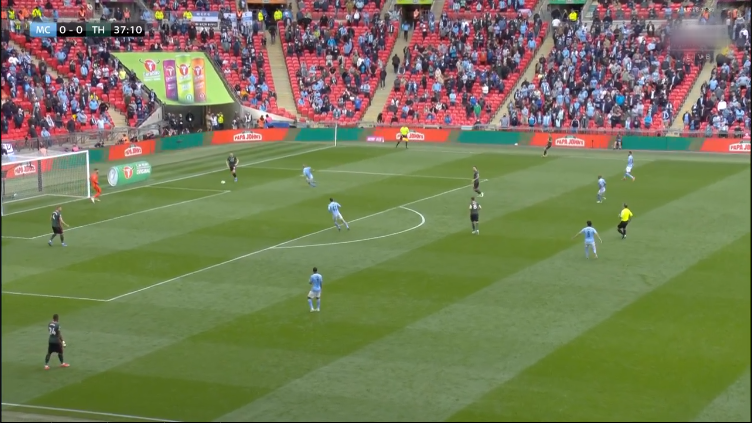 The two 9s split the gap between Lloris and the two Center backs, the job of the wingers was to force the ball into wide areas where they would intensely press the ball, the traps were successful and Spurs found it very difficult to gain any sort of hold in the game.

When Spurs did get on the ball, they attacked swiftly; the fullbacks pushed high and wide to join the front four in the final third, with Lo Celso making late runs from deep. The midfield pivot and the center back pairing were the rest defence in case of transitions and counters. Son, Kane and Moura would take up positions in and around the gaps between City’s center backs and fullbacks.

City would defend this with a 4-4-2 block with the wingers covering the fullbacks and De Bruyne and Foden forcing any passes from midfield into wide areas. The shape was often ball-oriented and the players would only move/rotate in the shape depending on where the ball was. 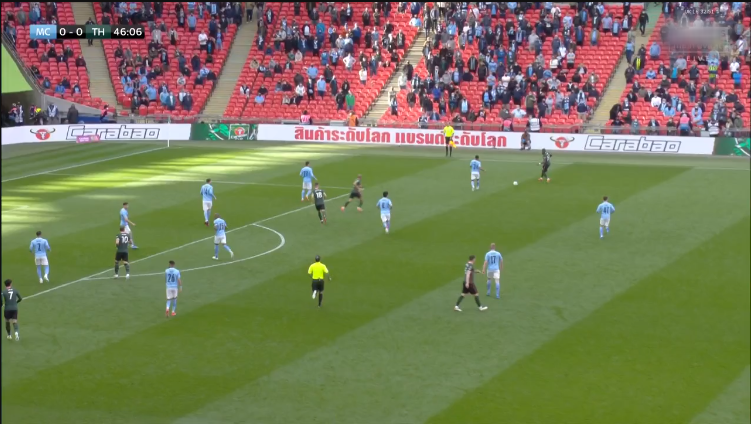 When City were able to progress the ball in the build up, they shaped up in a 3-2 structure in the build up, with the back three (Walker often joined the two defenders) and Cancelo pushing into midfield alongside Fernandinho, Gundogan would push up in support of the front two of KdB and Foden who would occupy the halfspaces. Mahrez and Sterling hugged the touchline to provide width and stretch the Spurs backline

Sometimes Cancelo would shift his position in the build up, moving from inverted to wide and vice versa in order to drag out Hojbjerg from Spurs’ midfield structure.

Spurs defensive shape was an interesting one, they decided to congest the central areas while leaving City to attack the flanks, the two wingers would join Kane to block central lanes and Lo Celso drops to make it a midfield three. It ended up as a sort of 4-3-3 hexagonal shape, blocking the passing lanes into City’s men between the lines. 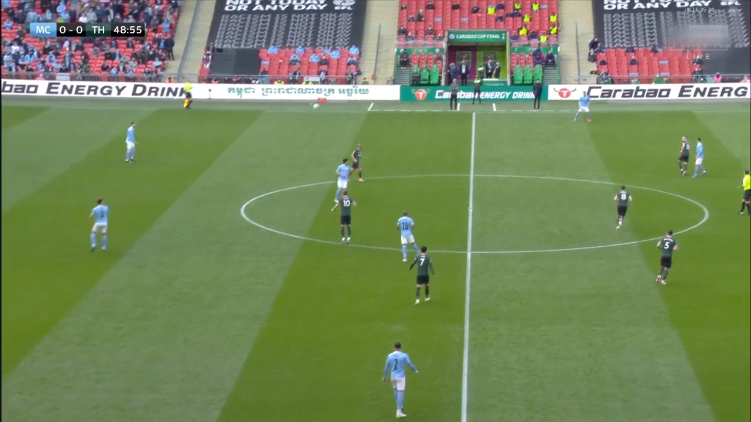 The fullbacks were instructed to aggressively close down City’s wingers anytime the ball was switched from one side of the pitch, during switches of play, sometimes players lose sight of the ball for a second, allowing the opponent to get a foot in to intercept the pass.

Anytime the ball was shifted out wide, the ball-side central midfielder would push wide to support the fullback to close down the player on the flank. The winger would drop into the space vacated to force passes backwards.

Ahead of the cup final there were so many questions; how would both clubs’ involvement in the Super League affect them? Would Mourinho have won this tie if he was still in the dugout? Could Ryan Mason pull off the impossible at Wembley?

Well the only answer we got from this was that Pep Guardiola is now 14-1 (win-loss record) in his last 15 career cup finals.

This was a very interesting game that would surely have played out differently if Jose Mourinho was involved, but I feel like Ryan Mason gave a good account of himself on the touchline. It took a lapse in concentration from Serge Aurier fouling Sterling, for Kevin de Bruyne to float in a free kick for Laporte to head home the winning goal in the 80th minute. Tottenham held Manchester City for more than 75 minutes which is impressive regardless of the opponent. Had Son and Kane come to the party, Spurs could have left the Wembley stadium with the trophy the club so desperately wanted.