Two sides who have arguably been England’s best two sides in the last decade meet in the Champions League final. Manchester City and Chelsea have gone down a similar path since the 2000s, both clubs have billionaire owners who have spared no expense in the bid to make their respective clubs the best in Europe.

Chelsea’s season has been a tale of two halves; coming into this season the club had hoped that they would challenge for the Premier League title having qualified for the Champions League last season under the relatively inexperienced Frank Lampard and a squad full of academy graduates. The addition of big money attacking signing Kai Havertz and Timo Werner looked like a sign of big things to come. However after a stretch of bad results and unrest in the dressing room saw Frank Lampard walk. He was replaced by Thomas Tuchel who took PSG to the final just last season. The transformation was almost immediate, the German made the team impressive defensively and sharpened a misfiring attack. They made it to the Champions League final by eliminating Real Madrid and Atletico Madrid. A loss in the FA cup final meant that Chelsea was more determined than ever to win the prestigious European trophy.

Pep Guardiola and Manchester City started the season poorly, they were shipping a lot of goals but were not finding the back of the net either. It all turned around when Pep tweaked his trusted 4-3-3 system and played without a striker. It worked, with City going on a phenomenal run through December and January which pushed them to first place in the league and an eventual place in the Champions League final. After five years of unsuccessful attempts at winning the Champions League, the Spaniard finally had his chance.

Let’s see how these two matched up on Saturday night.

Thomas Tuchel since taking over the London side has preferred a 3-4-3 system with a back three, wingbacks and a three man attack. The team plays fast and direct and press with intensity anytime they lose the ball. Chelsea are a very dangerous side in transition which is how they beat both Madrid sides to reach the final; Werner and Pulisic being the main outlets on the attack.

Chelsea build up with the back three and the goalkeeper with the wingers high and wide, they progress the ball through the midfield mainly Jorginho dropping in and receiving the ball. Tuchel’s side’s main weapon in attack is switching play to the wingbacks and attacking the weaker side pushing runners into the box. That is where Mason Mount is key, he can drive the ball into the box, leaving opposing midfielders in his tracks.

Defensively, Chelsea press high in the front and defend man to man at the back. Rudiger especially has thrived in this new system as he has the athleticism and pace to deal with any attacker in behind. 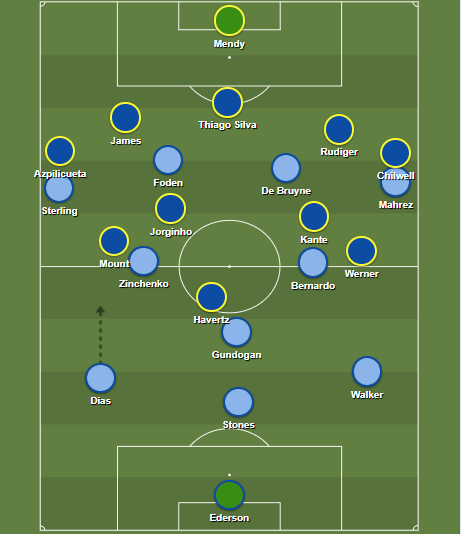 Pep Guardiola’s go to formation is the 4-3-3. The tweak he made to the system this season is playing without a striker; employing a false 9 and two inverted wingers with a midfield three. Defensively, Pep has also improved the system by going back to the 3-2 defensive shape they used in their second season, with one of the fullbacks inverting and playing in midfield alongside the defensive midfielder and the other fullback joining the two center backs to make a back three.

On Saturday, Pep decided to change what worked for him during the season. He started Raheem Sterling on the left to try and use his pace against Chelsea’s back line; this meant moving Kevin De Bruyne back into midfield, Phil Foden playing as the false 9 and surprisingly Gundogan, who had excelled throughout the season as an attacking midfielder who thrived making runs into the box, as a defensive midfielder.

His reason for this was “because he’s fast on the ball, to find good ball players in spaces”. This change effectively sacrificed control and balance for quicker attacks. And as we saw during the game, City’s attack suffered a lot because of this.

City’s lack of protection in transitions

The decision to go with one natural holding midfielder surrounded by two attackers instead of Pep’s usual combination of 2 midfielders + Bernardo was the key in the game. To demonstrate how this may have had a difference in the game look at the two scenarios below 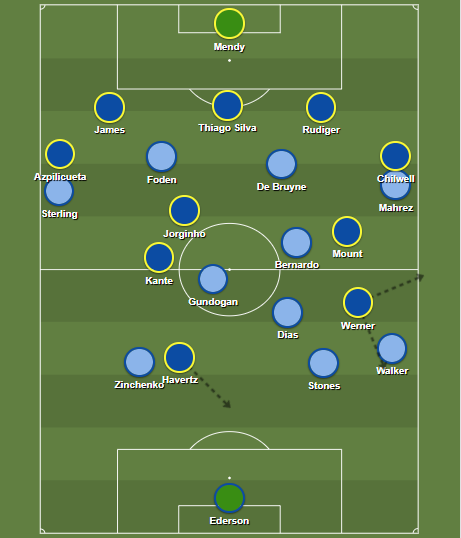 The first scenario was what caused the Havertz goal, two of City’s defenders got sucked in by the run of Timo Werner, who was causing a lot of havoc on transition. This meant a gap was created by the hole left by Dias and Zinchenko was a step behind Havertz who eventually got in behind the city defence to put it past Ederson. As you can see in the image, as many as three city players are around the ball handler Mount and the decoy run of Werner, leaving the gap between the center back and the left back exposed. The gap allowed Mount to easily thread the ball through to Havertz 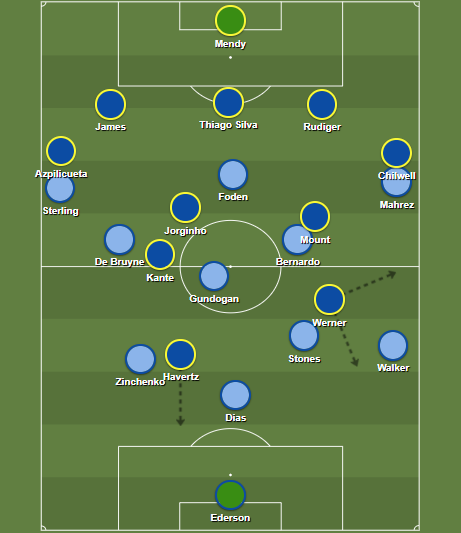 Now let’s look at this differently using Pep’s usual defensive shape since he changed the formation earlier in the season; there would be two bodies in the middle of the park in addition to the three defenders in transition. So if a situation like this came about where someone had to track Werner’s run, it would be a midfielder and not Dias vacating his post in defence. This would mean City would have the extra body to cut out the pass or at least delay it enough before it got into the path of Havertz.

Throughout the game you could see that Chelsea’s wing backs were told to be very aggressive against Sterling and Mahrez. Chilwell in particular stuck very tight to the Algerian and barely gave him space to move. City were unable to overload the wide areas too with Mount and Kante doing an incredible job to cut off any passes into central areas and as a result both wingers often passed it backwards anytime they got stuck. Bernardo Silva on the inside right and Zinchenko inside left had little to no means of combining with their wingers and thus anytime City moved the ball to wide areas the move quickly died. 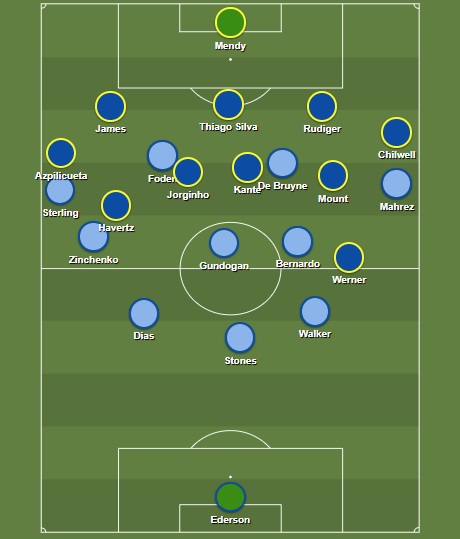 This could have been resolved by shifting Foden who is much better at taking his man on to the left, and pushing Sterling, who has much better movement in behind to the false 9 position. This could have worked, as early in the game Sterling almost scored from a long ball after he got in between James and Azpilicueta but his first touch was too poor in that scenario.

Pep Guardiola truly had zero solutions to Chelsea’s deep block; they could not penetrate it with passing or find their players in space in between the lines. Their usual method of beating the fullback 1v1 and cutting the ball back across goal also failed as Reece James and Chilwell did not give Sterling and Mahrez any space to run into.

However there was one thing City could have done more to break down Chelsea especially after they lost Thiago Silva midway through the game; they could have tried more balls in behind for Sterling to run onto. They created a few half chances in the game simply by playing one-twos and releasing the free man in behind, with Walker, Sterling and Aguero late on in the game all getting a sniff of goal from a long ball.

Chelsea came into this game having already beaten City twice this season, in the FA Cup final and a comeback victory in the Premier League. There are arguments to say that Pep lost both games because he (did actually) make a lot of rotations in both games. But in football, rotated players or not, a win is a win and Chelsea will come into this game with a lot of confidence and aggression keeping in mind they just lost an FA Cup final a couple of weeks ago.

Both managers are tacticians and both games were very good opportunities to feel each other out before their inevitable Champions league final. Tuchel found a way to beat Pep Guardiola twice, and Pep even shifted tactics in the game at the Etihad which would have ended in a Manchester City win if there had not been silly errors and poor defending. They both identified their strengths: Chelsea with Werner and their very intense high press which caused City a lot of problems and City’s strength being their improved defensive performances this season. Their weaknesses have also been on display too; Chelsea were often caught out by City’s long balls a lot in the game at the Etihad, and City’s obvious weakness is how their midfield struggled with Chelsea’s pressing in both games.

The big question was which manager would break and change his tactics ahead of the final. Pep Guardiola, to his credit, has maintained a consistent style but the ghosts from his previous Champions League upsets reared their ugly head on Saturday. Thomas Tuchel barely touched his Chelsea lineups, opting to play his best players every single game with the same systems and tactics.

After the last two fixtures against Tuchel, you cannot blame Pep Guardiola for trying something the German had not seen before from this City side. But the planning and execution having taken place just a few days before the final, you do question whether it was the right decision.

Ultimately, the final between Pep and Thomas Tuchel was a poker game in Porto; and Pep showed his hand and rightfully lost.