Did you know that in the last three times Barcelon and Paris Saint-Germain have faced each other in the Champions League knockout rounds, two of the ties had comebacks? The most infamous one being the 6-1 remontada at the Camp Nou back in 2017.

Barcelona-PSG has never been a major rivalry in Europe, but you sense that the remontada in 2017 and PSG snatching Neymar from the Camp Nou has made this fixture more intense and with high stakes.

Heading into this clash; Paris Saint-Germain appointed Mauricio Pochettino to replace the now new Chelsea manager Thomas Tuchel over a month ago, since then the Parisiens have won the French Champions’ trophy and have been on a quiet resurgence even though Neymar and Mbappe were absent for a few games.

Barcelona on the other hand, just when things looked bright and Koeman was winning plaudits for doing a great job at the Camp Nou, Barcelona lost the Spanish Super Cup final, went behind 2-0 to Sevilla in the Copa del Rey and are already 9 points behind leaders Atletico Madrid.

Barcelona have shifted from the 4-2-3-1 Koeman was stubborn to abandon early in the season and have settled on a more usual 4-3-3 shape. They deployed the same system at the Camp Nou: a frontline of Messi, Griezmann and Dembele ahead of a midfield of Pedri, Busquets and De Jong with Gerard Pique featuring in defence.

Paris Saint-Germain went with the 4-2-3-1, Pochettino’s favoured system throughout his career. Gana Gueye and Paredes anchored the midfield with Moise Kean on the right, Veratti as a number 10 and Mbappe playing off the left behind Icardi.

Barcelona attacked in more of a 3-2-5 shape, with emphasis on numerical superiority between the lines.

Jordi Alba was on the touchline on the left flank, Ousmane Dembele provided width on the right flank and Lionel Messi, Griezmann and Pedri offered bodies between the lines whenever De Jong and Busquets attempted to progress the ball.

There were nice little movements and rotations in the Barca attack; since Messi often likes to drop deep and move the ball, one of Pedri or De Jong would push up to fill the gap left in the lines. It was this movement that brought the penalty for Barca’s opener.

De Jong filled in Messi’s spot between the lines and made a run between the left back and center back before they fouled him in the penalty box. Messi dropping deep was not picked up by his midfield markers so he had all the time in the world to float a fantastic ball into De Jong’s path before he was fouled.

On the ball, there was always a third body in the defence; either Busquets dropping deep and splitting the center backs or Dest dropping from the right and staying inverted.

Dest and Dembele also alternated with their positioning and movement on the right flank, which differed from Jordi Alba’s role of being the lone threat down the left. In the sequence above, Dembele hugs the touchline while Dest moves inside to balance the midfield structure.

Off the ball, Barca settled into a 4-5-1 shape with Lionel Messi (who rarely puts pressure on the ball, as the lone first line of the press. Whenever PSG crossed into their half, they would settle into a more deep block, allowing PSG to progress. The movement of the defensive block was ball oriented, thus they always moved towards the side of the pitch with the ball as seen above; they ignore Layvin Kurzawa as they don’t anticipate any long balls reaching him that far up the pitch.

Paris Saint-Germain’s attacking shape was a 4-1-2-3 shape with three bodies up top between the lines occupying the defence and a pivot with two midfielders either side of him. The width in the attack was primarily provided by the runs of the fullbacks up and down the flank.

It was a sort of Liverpool-esque shape from PSG and it worked for the most part because their midfield trio of Gueye-Paredes-Veratti had the mobility and athleticism to cover the fullbacks whenever they overlapped. 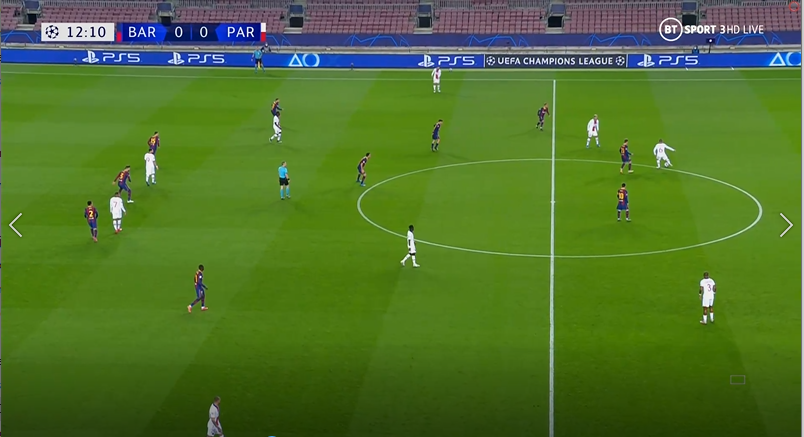 A key feature of the attack was Mbappe and Moise Kean drifting inside to provide bodies between the lines. This gave their markers (Dest and Alba) the conundrum of either following them infield, allowing the fullbacks more space to move into down the flanks or stay wide and allow the attackers to find the space down the side of the center backs. Mbappe especially thrived on Dest’s inability to make decisions during transitions which we will come to later.

PSG deployed a 4-5-1 block with the main aim to force Barca out wide instead of finding spaces between the lines where they could threaten them the most.

Mbappe and Kean would drop deep and Veratti would fall into a more natural central midfield role with Gueye dropping into a more conventional DM position to track the runs of Messi.

For the most part of the game, the shape worked; it forced Messi to drop deeper than usual and was able to contain the movements of Griezmann and Pedri, who both had very quiet games, in between the lines.

As with most clashes between two European heavyweights, pressing is almost expected every time. This clash between Barcelona and PSG was no different.

Even though counterpressing was what decided the tie between the two sides, Paris Saint-Germain did a very good job during the game of slowing down Barca’s buildup and preventing the ball from reaching Lionel Messi anywhere near the attacking third.

Straight from goal kicks, PSG press in a 4-2-3-1 shape, with the emphasis on pressing the ball side players, cutting off passes and switches of play to the opposite side of the field. Since Icardi was not reliable enough when it came to intensity, he was tasked with shadow marking Busquets in the build up while Moise Kean put pressure on Pique and Lenglet.

Veratti and Paredes would pick up De Jong and Pedri, and Gueye would stick to his task of marking Messi. This meant Barca had possessions for long spells of the game without threatening Pochettino’s side.

Barcelona’s issues in midfield and in transitions

Even before kick-off one could sense Barcelona would struggle in midfield; Pedri (a teenager with little physicality) and an aged Busquets were expected to match up with the dynamic and intense PSG midfield trio of Gueye-Veratti-Paredes.

Frenkie De Jong was the only player in the Barcelona midfield who could match up in terms of physical attributes with any of PSG’s trio and it was very evident throughout the game.

This issue was exposed in transition, as Barca were caught out for two of the goals they conceded in the second half.

The midfield issues were very evident in Mbappe’s second goal of the night, where Barca’s midfield were dropping too deep off the ball, which allowed Marquinho’s to find the fullback on the right.

In the shot above, the structure is all wrong; the wingers are dropped in beside the defence instead of getting closer to the fullbacks, leaving only 3 bodies in midfield, making it easy for PSG when they had the ball.

The midfield is not connected to the defence enough leaving gaps for Moise Kean, Mbappe, Veratti and Icardi to operate between the lines. Even though the ball did not reach them in attack, it allowed them to have a running start with no one tracking them as Mbappe scored an easy goal from the tap-in.

This is where PSG killed the game. They scored 3 of the 4 goals from winning the ball from Barca when they were attacking, their counter pressing was exquisite too and it allowed them to quickly progress and penetrate the empty spaces Barca left in attack.

PSG were often outnumbering Barca on every counter attack with Mbappe leading the charge. Mbappe had a very good game coming off the left as he attacked the channel between Dest and Pique time and time again to devastating effect. Ousman Dembele was also to be blamed for large parts of the match as he failed to provide cover for the young fullback who has a bit of inexperience at this level against a superstar talent like Mbappe.

It was almost too easy for PSG during the night as they found a lot of joy targeting Barca’s slower players in Pique and Busquets.

Barcelona have the most important couple of weeks of their season coming up; two away goals behind in the Copa Del Rey to Sevilla and now four away goals down to PSG ahead of the tie in Parc des Princes, it will take a miracle (and Messi magic) for them to stand any chance of progressing through either tie.

But as always, with Barca and PSG in the Champions League, never say never. They came back from 4 goals down to win 6-1 in 2017 and overcame a 3-2 deficit in 2014. If Barcelona are to stand any chance of salvaging their season, they must complete another miracle in Paris.