When Leicester City defeated Sevilla 2-0 at the King Power stadium last week, Jorge Sampaoli said the defeat was “underserved.” He went on to explain further, saying that “with 10 men, we still forced Leicester back to their goal in the second half,” and while all of that may be true, we can’t ignore their poor first-half performance nor their failing form in LaLiga.

Prior to their Champions League exit in England, Sevilla had dropped points against newly promoted sides Alaves and Leganes and their title aspirations were becoming a serious doubt with Real Madrid improving their grip on the league. Things were looking grim for a team that had such high hopes this season.

Fast forward to Steven N’Zonzi’s missed penalty at King Power stadium, which was the second missed penalty in the tie, and Sevilla’s hopeful and praise-ridden season seemed to collapse before them. Sure, they still had the opportunity to finish top four, they were currently in third at the time, but this was a Sampaoli-led squad that truly thought they could win the league and many actually considered them dark horses in Europe.

But it wasn’t meant to be. The intensity has dipped in their positional play and possession game and, as a result, they’ve had to rely on fewer goals to win which means their poor organization without the ball has shown its ugly head for all to see. Earlier in the year, when many thought Sevilla had upstaged Atletico Madrid as the de facto third horse in a mostly two-horse race, a decent amount of skeptics pointed to their fragility in defense as the reason their hot form would not last. Those skeptics, a couple of months on, are right, but there’s more to it.

This Sevilla club looks like they’ve already given up the fight for first place in the Primera Division and are settling for a third-place battle with Diego Simeone’s men, and as Sampaoli left King Power stadium that Tuesday night, he knew the pressure was still on – training his side for Atletico Madrid at the weekend was set to begin on their arrival back in Spain and another decisive fixture in his career was upon him yet again.

The Argentine’s tenure as manager has been defined by changing lineups and formations on a game-to-game basis, couple this with his Marcelo Bielsa-like philosophy and you have the reason for every tactical nerd under the sun to have put this 16/17 Sevilla outfit on their writing agenda.

But for this match at the Estadio Vicente Calderon, Sampaoli opted with a relatively fresh 5-4-1 formation that resembled more of a 4-2-3-1 in attack. Normally, we at Eat would highlight some of Sevilla’s profound players in this new formation, but there wasn’t a need as Atletico Madrid were about to demonstrate a high-pressing masterclass to their home fans and Sevilla were going to struggle to impose themselves with their possession style.

Below, we see that Atletico Madrid (red circles) is engaging Sevilla in a 4-4-2 zonal high-press. Their four-man midfield hug the central-axis (orange lines) closely while their two forwards will passively mark Sevilla’s center-backs.

The key is to clog the central axis in unison to force play out wide. They want to make the passes to Sevilla’s two pivots (blue circles) as high-risk as possible. 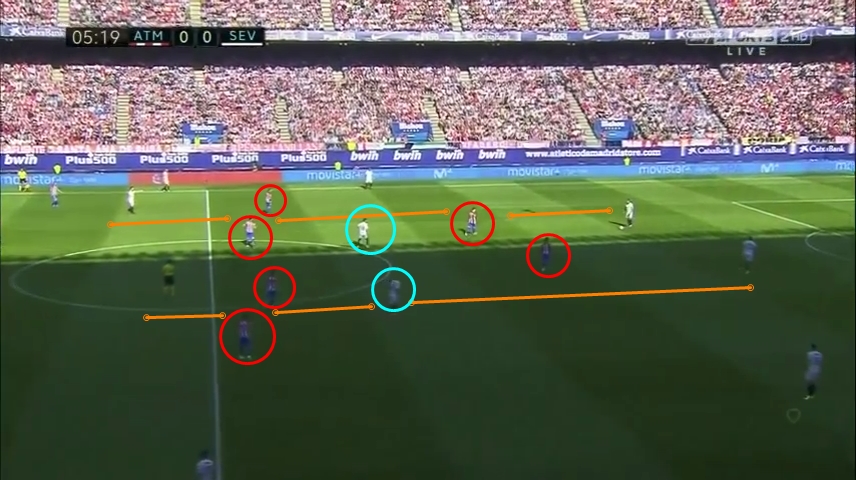 In the next phase of the press below, we see that Atleti has pressed higher up the pitch with Antoine Griezmann, Kevin Gameiro, Gabi and Saul forming a square within the central axis (orange lines). Atleti’s two forwards and central midfielders (red circles) have isolated Sergio Escudero (blue circle) while Steven N’Zonzi (yellow) has since drifted out wide. A couple of seconds later, Sevilla has managed to get the ball (blue circle) to Lenglet while Atleti’s Griezmann and Gabi screen the passing lane (purple grid) to N’Zonzi and Yannick Carrasco (lower-left red circle), screens his marker (out of frame) and forces Lenglet to make a high-risk pass. Lastly, below, we see that Lenglet has tried passing to Escudero (yellow) but Saul (red) is right in front of his marker and receives the poor pass (blue) as Lenglet was forced to make an uncomfortable decision that played right into Atletico’s hands. To achieve success with a zonal high-press, your whole squad needs to time their runs and screens with perfect precision all while moving as a unit. There’s a time to intensely man-mark and also a time to carefully occupy the most important spaces to prevent your opponent from having a successful build-up.

Sevilla was pushed back

As the first-half continued, it became apparent that Sevilla was going to have a tough time getting out of their half. As a result, Atletico Madrid saw a good amount of the ball at many stages and really tried to play directly as possible.

Below, we see that Sevilla (yellow) have resorted to a rather unorganized low-block and are protecting the central axis (orange lines). It should be noted that when a side that is used to having the ball and high-pressing is pushed back in this fashion, the outcome usually isn’t good as they’ll be susceptible to making mistakes in a block they are not particularly used to playing in.

Simeone’s Atletico Madrid don’t play an attacking game the requires excellent positional play and complex passing combinations, instead, his Atleti outfit focus on quick counter-attacking transitions that rely on direct passing and quick 1-2 plays. They favor quick combinations that rely on long-balls, wide crosses, and strikers who are excellent individually.

Below, we see Saul (red circle) passing an overhead long-ball (blue circle) to Carrasco (purple). The play started around their penalty area and required Saul to quickly see his passing options and for Carrasco to utilize his speed to stretch a scrambling and extremely high-up Sevilla midfield. This is classic Atletico Madrid – defending well and then bypassing a scrambling opposition midfield with one damaging pass to one of their highly skilled forwards. They keep it simple.

Next, we see that Carrasco (red circle) received the pass; he ran into a dangerous space and has forced Mercado (yellow arrow) to foul him. To conclude the play, below, we see that the free-kick allows for Diego Godin to showcase his infamous heading ability and reward his side for their hard work in low-blocking and high-pressing phases. Above, we also see that Godin (red) is clearly unmarked and thus showcases, yet again, Sevilla’s poor defending.

Atletico’s low-block to kill the half

It wouldn’t be a proper Atletico Madrid match analysis piece without mentioning their world class low-block. Even amidst their transition into a more expansive outfit, Simeone’s side still manages to rely on their old strengths when needed.

In the next screenshot, we see that Atleti has retreated to their close and compact 4-4-2 with Savic, Juanfran, Carrasco and Saul forming a square (red circles) while Sevilla works the left-flank with three men trying to form a triangle (yellow lines). Above, we also see that one Sevilla player is isolated in the defensive square shape with Savic playing him extremely close. As a result of this, Sevilla will add another man to the flank and try to match in numbers.

Below, we see that Sevilla has formed two triangles (yellow lines) with their extra man while Savic has retreated to help Godin set up a 1v2 situation in the penalty area. It should also be noted that Griezmann (purple circle) tracks back deep to help with the overload of the flank or to wait to apply pressure to Sevilla’s possible backward pass. Interestingly, below, we see that the extra Sevilla man (Nasri – blue circle) has allowed Sampaoli’s side to enter Atleti’s penalty area. But Atletico is about to demonstrate how they work when they’ve been broken.

With Nasri coming down the left, Savic will mark him physically while Godin (red arrow) man-marks Ben Yedder (blue arrow) to make Yedder a high-risk passing option.
As a result of both Atleti center-backs shifting to man-mark, the midfielders (three red circles) form a wall and screen any potential passes to the central part of the penalty area (purple grid). The second-half would continue in the same fashion – Atleti would high-press and low-block effectively with Sevilla struggling to get out of their zone and create around Atletico’s penalty area. Around the 60th minute mark, Griezmann would put his side up 2-0 after a beautifully executed free-kick goal and Koke would increase the lead on a midfield transition that resulted in Sevilla poorly defending their penalty box on the back-foot.

The final score would read 3-1 in Atleti’s favor with Sevilla now going winless in their past four matches across all competitions. Sampaoli has reached a crossroads in his first season with Sevilla as the side is struggling to close out the season and is on a downward spiral – Atletico demolished them in every aspect.