In the last three seasons, Atletico Madrid have lost just two home games in European competition, both have come against Chelsea.

Diego Simeone’s Atletico Madrid have often been the best side in Europe on the counter during European nights. Atletico sit back and contain the opposition before breaking on transition, they aren’t afraid to play (very) deep and that is one of the things that decided tuesday night’s tie. Chelsea, however, came into this game looking to dominate on and off the ball limiting Atletico’s transition threat while creating openings of their own.

Chelsea lined up in their usual 3-4-2-1 / 3-4-3 during this game (which differed wildly from the UEFA lineup graphics). Alonso and Hudson-Odoi played as Wingbacks, with a front three of Werner, Giroud and Mount, with a Jorginho-Kovacic pivot in midfield.

Before the game, there was a lot of debate surrounding which shape Diego Simeone would go into the game with. He ended up deciding on a 4-4-2 shape on the ball, but off the ball it was more of the 5-3-2 he deployed in multiple games this season (as we will see later).

How the teams shaped up

In the defensive phase, Chelsea defended in a 5-4-1 shape with both wingbacks falling and tucking in alongside the back three, the two forwards flanking the striker also drop back to plug the gaps in midfield. The lone striker acts as the first line of the press, not venturing too far from the midfield during defensive transition (but with Giroud it was a bit difficult as he lacks mobility)

When attacking Chelsea move into a sort of 3-2-5 shape, with the final line of five players trying to overload Atletico Madrid’s defensive line. The midfield pivot position themselves between the strikers and the midfielders and the three Chelsea forwards occupy the defence; in this case, as Atletico defended with a line of six, the two attackers flanking Giroud would station themselves between the wide defenders (fullbacks) and the center backs. Chelsea’s wing backs also looked to stretch the pitch by hugging the touchline

On the ball Atletico played in their usual 4-4-2 shape as already mentioned. Lemar and Correa had different roles as the wide midfielders, with Correa playing more as a winger who attacked Marcos Alonso on the right, as Lemar provided a more defensive solidity against Hudson odoi on the left.

But in the defensive shape, they deployed a sort of 6-3-1; with the wide midfielders (Lemar and Correa), tucking in alongside the fullbacks, Joao Felix also dropped off the attacking line to form a midfield three alongside Koke and Saul. Luis Suarez stood alone as the first line of Atletico’s defence. 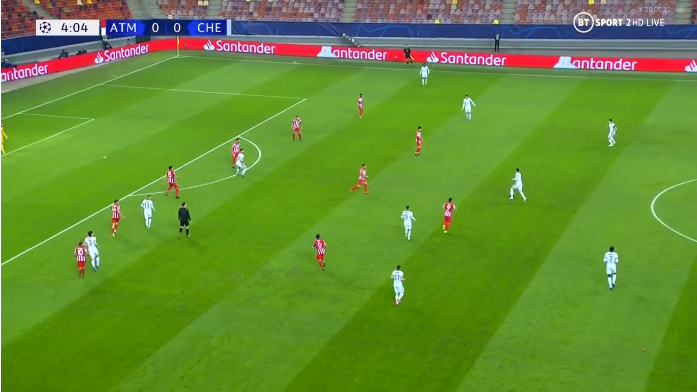 A major part of the game revolved around pressing from both sides; with Atletico and Chelsea taking different directions when it came to how they progressed play through the thirds: While Chelsea focused on a more patient method passing to try and break down Diego Simeone’s side, Atletico Madrid posed a more transition oriented style; quickly getting the ball to Joao Felix/Luis Suarez to hold up play or release runners from deep.

According to fbref, Jan Oblak launched 88.9% of his goal kicks longer than 40 yards. The structure below was how Atletico set up for these goal kicks; with the aim to win the second ball, switch play before attacking the spaces between the gaps left by Chelsea’s players as they fell into a settled shape.

The goal kicks were aimed towards the right side of Chelsea’s shape. To target Hudson-Odoi aerially, as Marcos Alonso on the left flank is more capable of handling himself aerially.

Atletico’s pressing was an interesting aspect of the game, because even in their 6-3-1 shape they were able to cause Chelsea a lot of problems pressing from the front. As seen in this screenshot from fbref Atletico’s front six were the most involved in pressing actions.

The front two split the space between Chelsea’s back three, with the player closer to the ball aggressively tackling the ball holder. The second line of four would push to cover the ball far side of the pitch to prevent switching play with diagonal passes.

Chelsea on the other hand, built up slowly with their passing with the aim to draw in Atletico’s press before playing the ball into Marcos Alonso or Hudson-Odoi out wide. As seen in the screenshot below, the Blues’ back six were heavily involved when it came to touches and passing the ball.

Atletico never pressed Chelsea during goal kicks, they rather dropped to near the halfway line waiting for the ball to cross their half, before attempting to win it back and transition. As such, Chelsea’s back six recycled possession among themselves for large periods of the games with little to no penetration.

The match was attack against defence for large parts of the game, with Chelsea forced to push numbers high into Atletico’s half in order to try and break down their block. This played into Atletico’s hands, who would push Chelsea’s players to turnover the ball and break at speed.

It was very apparent that Tuchel’s answer to Simeone’s transitions was to commit tactical fouls, in the first minute, Atletico won the ball and attempted to start an attack with Joao Felix, but as soon as the Portuguese youngster tried to progress play, he was clattered into by Mason Mount, setting the tone for these situations.

Some of Chelsea’s counter pressing was impressive, but most often, Atletico were able to break through with one-twos and flicks, and Chelsea had to foul them as quickly as possible.

In the sequence below, Atletico cause a turnover and win the ball. They try to transition quickly but are surrounded by as many as four Chelsea players, which forced Atletico to pass backwards and recycle possession.

When the counterpress did not work (which happened a lot in this game), Chelsea resorted to fouling, and made 21 fouls in 90 minutes. Most of them on Joao Felix who was Atletico’s main outlet on the counter. Chelsea’s fouls were made immediately when Atletico Madrid played the ball past their counter press, most of them came within metres of the edge of Atletico’s penalty area.

Looking back on the game, both sides did not threaten each other much; the shots were shifted towards Chelsea’s favour as they had more set pieces and attempted more shots from range.

Atletico however, had no shots on target in the game. This is not due to Chelsea “dominating” play or being in control of the game; rather it is a side effect of how Simeone set up to play, he packed 9 men behind the ball and expected one-man transition attacks.

There was too much of a gap between Atletico’s forward players and their midfield during open play. In the sequence above, Atletico manage to force a turnover and are preparing to counter attack. But look at their shape, they dont have enough numbers in advanced areas, and in this scenario it would take a piece of brilliance from Joao Felix to find Luis Suarez in behind. This did not pan out, as Felix was quickly fouled.

Why the 6-3-1? Well the shape did a couple of things right; it neutralized Chelsea’s threat from wide areas, limiting Hudson-Odoi on the ball, tracking Alonso’s runs from deep and stifling Giroud and Werner for large parts of the game as the defenders had freedom to drop and follow them into deeper areas.

Chelsea had more time on the ball to break down Atletico’s block and as the game wore on tiredness and fatigue set in leading to questionable actions from some of Atletico’s players, one of which was an attempted block which played Giroud onside for the goal.

Atletico came into this tie with Simeone essentially having handicapped the team with his choice of shape on defence, it left metres of the pitch to cover during counter attacks, and Atletico’s lack of bodies in areas made it even harder to progress the ball. This was the main reason why Atletico’s attempts came from winning the ball and attacking in Chelsea’s half.

With the London boys taking an away goal to Stamford Bridge, You feel the only way Atletico can win this tie is to let loose the defensive shackles and attempt to play with the identity they started the season with: possessing the ball and creating openings with one-twos and finding runners from deep.

After a mini-rebuild over the summer, Atletico looked set to strengthen their claim to be one of Spain’s best teams this season. But with them on the brink of elimination in the Champions league and dropping points in the La Liga title race, this might be Simeone’s last stand in London.