Watford and Schmidt: Would it have worked?

I’ve been saying for some time in various different circles now that I don’t understand why more Premier League teams don’t go for German managers. There was, of course, the Felix Magath disaster with Fulham, but there’s a whole host of tactically sound talented German managers that would suit Premier League football perfectly. One of those I believe would be superb in the Premier League is Roger Schmidt, so when he got sacked from Bayer Leverkusen back in March I didn’t think he’d be out of work for long, but despite a number of Premier League teams failing in the league nobody took a punt.

So when my team (Watford) unceremoniously got rid of their manager last month I was very vocal on the Watford forums and on Slack that I wanted Roger Schmidt to be the man to lead us into next season. So imagine my surprise when it was rumoured that Schmidt was to be the main choice for the Pozzos to manage Watford next season. Sadly that didn’t happen with us instead landing Marco Silva (still a good appointment!) with Schmidt heading off to China instead.

So how does Schmidt set his teams up to play football, and how would that have suited Watford if he had got the job?

Schmidt largely uses a very fluid 4-2-2-2 system (that also changes between a 4-2-3-1 and 4-42), often meaning it’s actually hard to tell what formation is being used, however, there are several key principles always at play that I’ll delve into below. 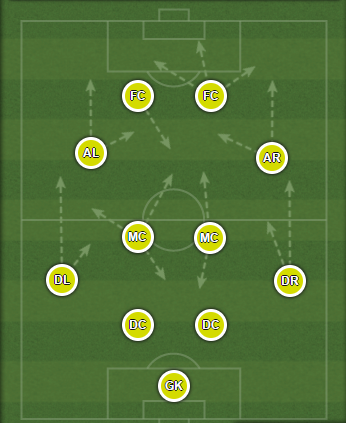 The strikers are expected to work hard and relentlessly press the opposition defence and midfield, as well as that they need to be technically proficient, good finishers and clever in their movement. Schmidt seems to favour one quick striker with his partner usually slower – with the slower of the pair usually dropping a bit deeper into midfield. This has been a constant for a majority of Schmidt’s managerial career.

So how do the Watford strikers fit into this philosophy? Troy Deeney is obviously the main man at Watford and I think he’d flourish under Schmidt. During Watford’s time in the Championship Deeney impressed plenty of fans with his desire to win the ball and hunger (no jokes about his size) and has shown that he knows where the net is with over 90 goals in the last five seasons, and is definitely more mobile than a lot give him credit for. Deeney had also been asked to drop into midfield at numerous times under Quique Sanchez Flores so would be a shoo-in for that role.

The quicker striker role is a bit more complex with Mbaye Niang looking unlikely to be signing permanently and Stefano Okaka not mobile enough to play that role (although Okaka would make a great rotation option for Deeney’s role). This is a spot that Watford need to be looking to improve in. Isaac Success is a huge talent and could potentially play that role, but question marks remain about his fitness (Walter Mazzarri had constantly claimed that Success is unfit to start this season) and potentially his technique. Nordin Amrabat could be a left-field suggestion – he was sometimes deployed as a striker at Malaga before joining Watford, however, he’s not renowned for his tackling nor his finishing ability so it’s likely Watford would need to put their hands into their pockets and buy a quality striker to partner Deeney.

Schmidt’s wingers play much like inside forwards, occupying the half-space between the full-back and centre-back. This allows them to, like the strikers, press relentlessly – whether that be the opposition defence or the midfield. The wingers are quick, technically good and adept at finishing and creating chances – a list of players who have played under Schmidt in this system will give you an idea of the type of player he looks for: Sadio Mane (played under Schmidt at Red Bull Salzburg), Heung-Min Son (Bayer Leverkusen), Julian Brandt (Leverkusen) and Kevin Kampl played under Schmidt at both Leverkusen and Red Bull Salzburg.

Watford struggle in this area, as previously discussed Amrabat and Success are more wingers than strikers, however, I do not feel Amrabat is of sufficient technical quality nor good enough in the tackle to be a starter in Schmidt’s system. However, Roberto Pereyra (who missed a good chunk of the season through injury) would be an ideal candidate. Whilst he’s more of a playmaker he’s also been used as a winger both at Watford and at Juventus, his technique is fantastic and I’m sure he’d fit the bill alongside Success.

Another potential candidate is Adalberto Peñaranda who has been on loan for the season as he failed to qualify for a work permit, there’s a lot of similarities between Peñaranda and Mane when he was at Red Bull Salzburg, although question marks remain about his attitude after a number of fallings out with managers over the past couple of seasons – if he can gain a work permit and get on board with Schmidt’s philosophy then he could potentially have a fantastic debut season in England, as seen with his standout display during the U20 World Cup with Venezuela.

Like the other positions covered, Schmidt likes his central midfield to work hard, with one of the midfield pairing being primarily defensive (Lars Bender at Leverkusen), and the other being more versatile (such as Gonzalo Castro at Leverkusen) but still solid defensively.

Abdoulaye Doucoure has been one of Watford’s stand out players this season (and it baffles me why Walter Mazzarri only decided to give him his first league start in January) and would fit perfectly into the system as the more defensive minded of the pair. I’m so confident of this that I believe Doucoure could be Watford’s Player of the Season contender under Schmidt. With Valon Behrami ageing quickly and likely to return to his native Switzerland over the summer, he’s out of the running.

Etienne Capoue I think would struggle under Schmidt and I wouldn’t be surprised to see him depart – he lacks the intensity and desire that saw him excluded from Tottenham under Pochettino and playing a similar style of football with Schmidt may see him forced out.

Tom Cleverley has been outstanding for Watford since joining on loan from Everton (and since signing permanently) and would fit the versatile role. Whilst not being fantastic defensively, he has the work-rate and willingness to get back that would fit into Schmidt’s plans. His passing range and versatility are much like that of Castro when he was at Leverkusen, and like Doucoure, I think he’d thrive under Schmidt. That being said, Watford are light in this area and would most likely need to delve into the transfer market for suitable backups or potential upgrades, unless one of the players out on loan (such as Uche Agbo or Sven Kums) can fit the system, but I haven’t seen enough of them to comment.

I’ve never known a team to go through full-backs as quick as Watford, with the turnover simply staggering since the Pozzos took over (I make it 18 since 12/13!) and it’s likely that they’d have to make that number higher if Schmidt took charge.

Schmidt likes his fullbacks to push high up the pitch to join the midfield when in possession and that would suit their current crop of fullbacks (Jose Holebas and Daryl Janmaat) perfectly, however, with soon to be 33-year-old Holebas the only out and out left-back and with question marks over his defensive ability and discipline (somehow managing an incredible 14 yellow cards this season), it’s recommended that Watford splash the cash to find a new first choice left-back (potentially Nathan Ake who had a fantastic season at Watford under Quique Sanchez Flores).

Janmaat would fit perfectly into Schmidt’s system, as would forgotten man Brice Dja Djédjé who’ll be hoping to make the squad list this year.

As Schmidt’s teams implement such a high pressing, attacking philosophy they can easily be caught out on the counter-attack, therefore it’s important that the centre-backs are quick, strong and good in the tackle.

Sebastian Prodl has been by far Watford’s best defender this season, but he’s agonisingly slow and would likely be a casualty of such a system. Similarly, Miguel Britos is not getting any younger and was never the quickest to begin with. Adrian Mariappa and Younes Kaboul aren’t getting any younger and are probably past their best. Christian Kabasele is most likely the quickest centre-back at Watford’s disposal at the moment, but there are question marks of whether he’s up to scratch having played less than 800 minutes all season and most of that coming from wing-back. Craig Cathcart is the final Watford centre-back and I think he’d manage to fit into Schmidt’s likely team without too much hassle, but again investment or time to gel will be needed in order to get Watford up to scratch.

Schmidt would be a fantastic appointment by any mid-table Premier League club, he won’t be a long-term appointment by any means (due to the exhausting nature of his football) and would require a big turnover in players and revamp in Watford’s squad, however Watford have shown time and time again that they can cope with such upheaval and I believe that Schmidt could’ve comfortably guided Watford to 10th or potentially even higher if all the players bought into his philosophy and the Pozzos acquired the necessary players for his system. 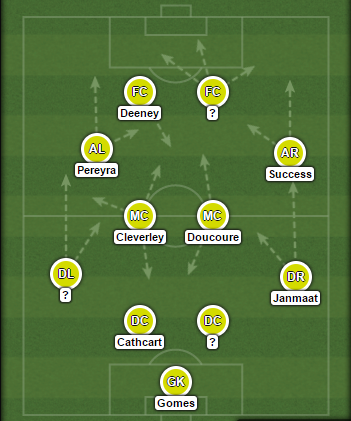