Coming off the back of an impressive season under Frank Lampard, Chelsea went all out in the summer to beef up the squad as they put their trust in their club legend to lead them back to trophy wins. Chelsea gave Lampard a war chest acquiring multiple attacking players for a sum of over 200 million pounds during the summer ahead of the 2020/21 season. All eyes were on Lampard, he delivered with a young core after losing Hazard to Real Madrid the past season, now with even more funding, he was expected to challenge for the Premier League. Kai Havertz, Timo Werner and Hakim Ziyech were the marquee signings coming into the new season.

After an unimpressive first half of the season, with Chelsea only winning 8 games and 14 points off of the league leaders forced the board’s hands to finally get rid of Frank Lampard. Reports claimed he was losing control of the dressing room and the players had played a huge part in getting him sacked.

Then came Thomas Tuchel, who himself had been sacked by Paris Saint-Germain earlier in the season in December. The former Dortmund manager got into a public spat with the PSG hierarchy after they failed to properly upgrade PSG’s squad ahead of the season, despite Tuchel leading the Parisiens to a Champions League final in August.

Tuchel was hired and took charge of the London club on the 26th of January and his first result was a drab 0-0 draw. But ever since that result and new system under Tuchel, Chelsea have gathered the second most points in the league since matchday 20. The Blues are only 5 points behind Manchester City over the same period, with 6 wins, 4 draws and zero losses since January. Chelsea have shut up shop, only conceding 2 goals over the past 10 games, the best defensive record over that stretch.

The Blues also managed to knock the formidable Atletico Madrid out of the Champions League round of 16, a very impressive feat. So how has Thomas Tuchel achieved this level of success over the past few months? Was it the tactics, the players or a mixture of both? Let’s take a look at Tuchel’s Blues.

Tuchel’s Chelsea side is a stark contrast from his free-flowing attacking Dortmund side and is more similar to his latter years at PSG where he found most of his success at the club, adapting his system and lineups to work around the constant injuries and poor form of Neymar and Kylian Mbappe that season.

Over a 100 games in charge of Dortmund, Tuchel saw his side score over 260 goals in all competitions, at Paris Saint-Germain, the team scored 348 goals over 127 games. Tuchel’s reputation before coming to Stamford Bridge was based on his impressive attacking philosophy, including getting his sides to score a lot of goals.

At Chelsea, Tuchel has been able to stabilize the team by implementing a more cautious, measured approach to possession-based football, with emphasis on defending by keeping the ball with numerical superiority in defence. His 3-4-3 system attacks with five players and also defends with 5 players, a more balanced approach than at Dortmund and PSG where his teams attacked with as many as 6 players in the final 3rd. 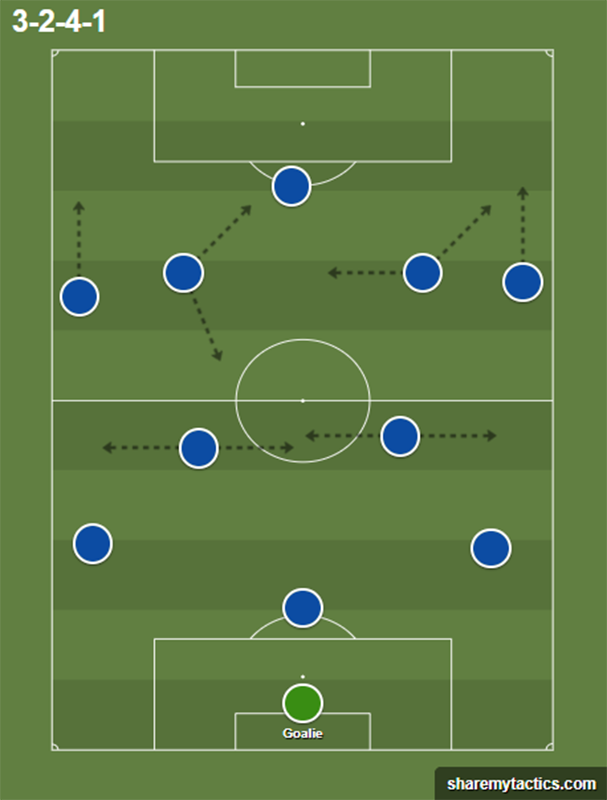 Tuchel deploys a 3-4-3/3-4-2-1 with a back three, two wingbacks, a midfield pivot and a combination of three attackers up front, with one operating as the “main” striker.

One of the reasons why Tuchel’s system works so well is the fact that he plays with three or five defenders (depending on the phase of play) rather than the orthodox back four. A back three more than often provides a more stable base, as it gives an extra body in defence and three players cover the width of the pitch better than just two center backs.

Also the back three or back five as a natural structure provides a lot of angles and passing lanes which exponentially increases the variety of ways a team can build up from the back. 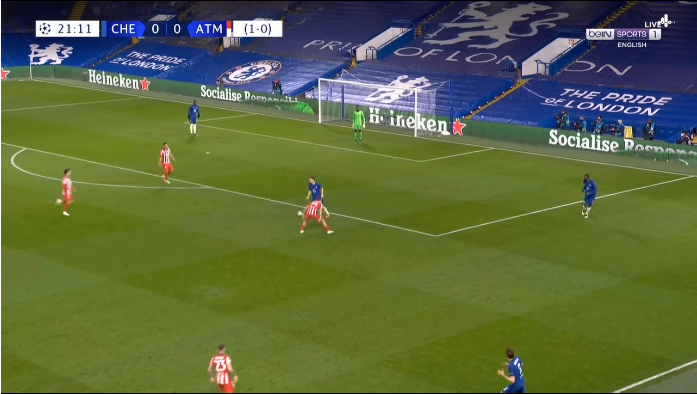 There are more options and very importantly, the ability to overload the first phase of play with even more bodies. When the opponent press becomes overwhelming, the 3-4-3 provides unique outlet options, the ball can be floated to either wingback hugging the touchline or the ball can be played into the channels for the front three to receive with their back to goal.

In the defensive phase, the 3-4-3 provides solidity in a deep block, as the shape essentially becomes a 5-4-1 where the wide areas, central areas and half spaces each have a player to cover the gaps.

As seen in the screenshot below, the 3-4-3 becomes a 5-4-1 shape, with two lines of players behind the ball. 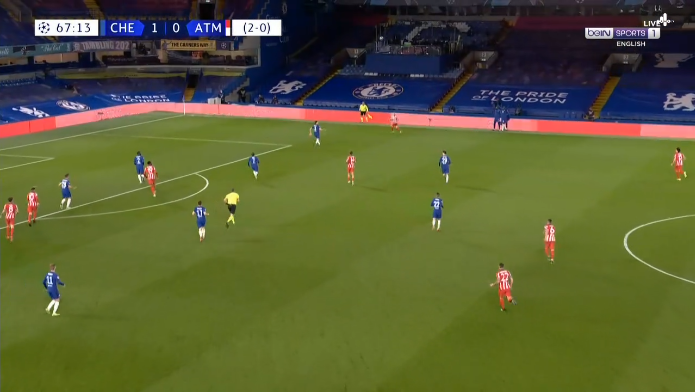 As mentioned earlier, the 3-4-3 provides a variety of angles and lanes to play into, it is also the same in attack. The shape creates a lot of triangles all over the pitch, the main pattern Tuchel’s Chelsea side use is the Wingback-Midfielder-Wide Forward triangle which forms naturally down the sides due to the shape. 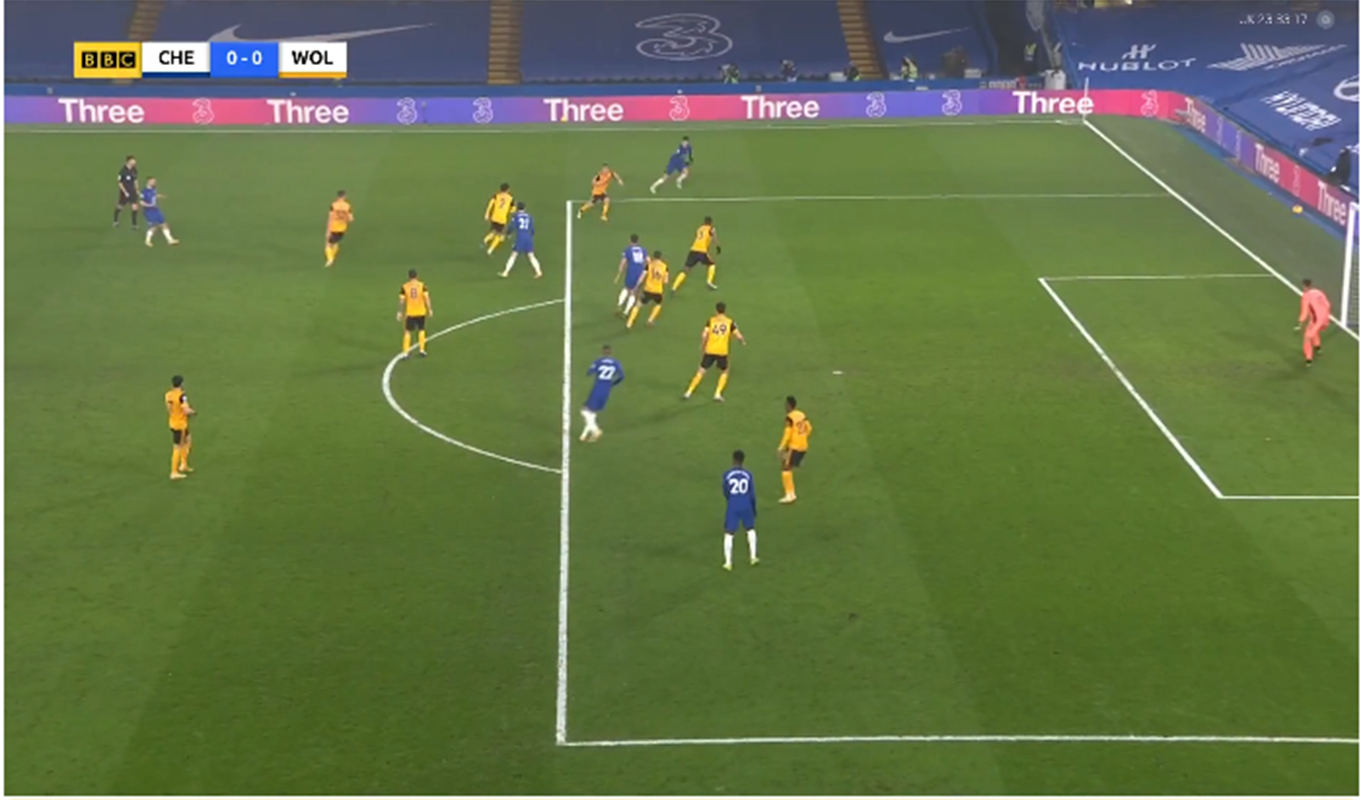 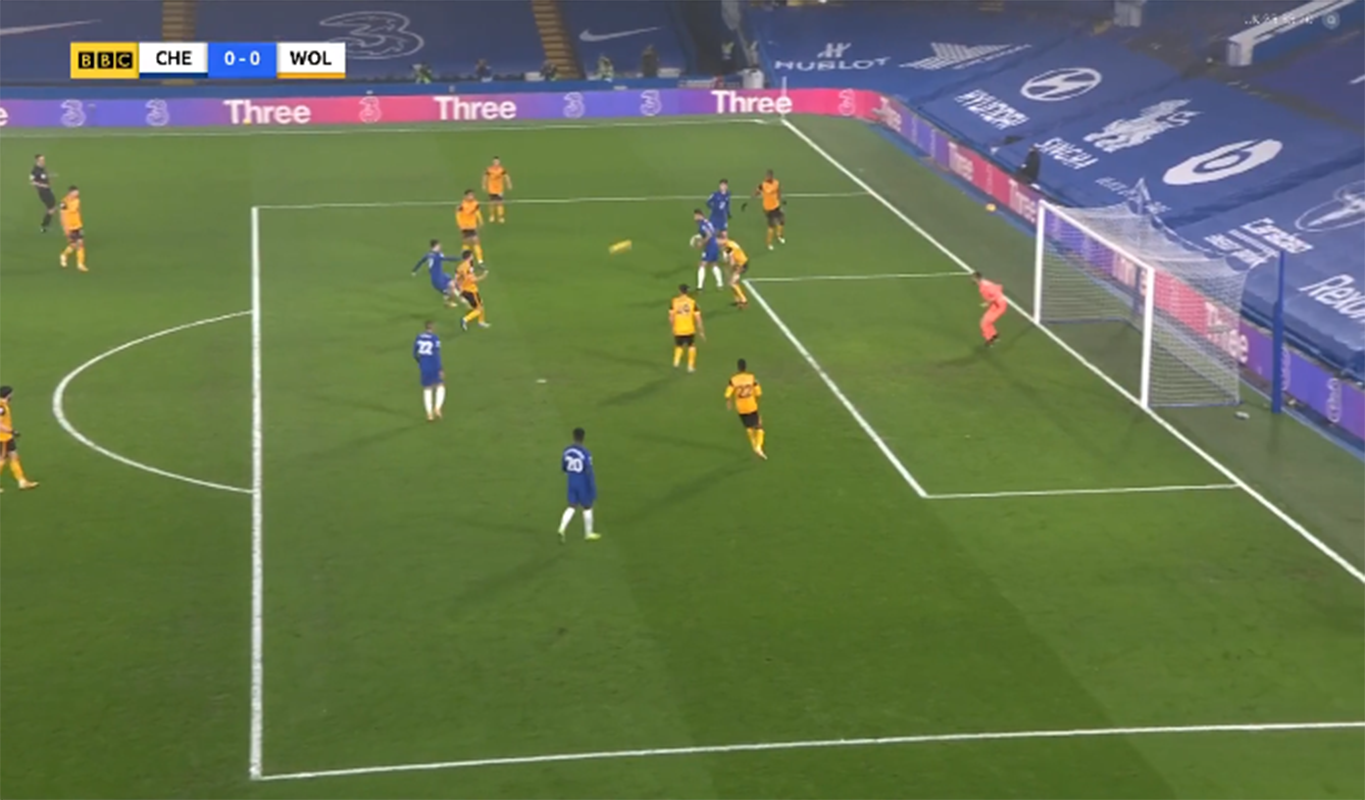 In the sequence of play above, in Tuchel’s first game, we can already see these WB-CM-FW rotations, here Kovacic slides a pass into the wingback, who cuts it back for Kai Havertz (playing in the forward role) who overhits his shot from the cutback. That pattern is a very common way for Chelsea to create separation to attack the final third.

The 3-4-3 also places a player in each of the five zones of positional play; the wing backs occupying the wide areas, the inside forwards occupying the half spaces and the striker hovering around the central areas.

Chelsea do a decent job of defending with the ball using possession, but their counterpress has been one of the best ways they have improved defensively. Whenever Chelsea loses the ball, they press instantly to try to win the ball back and often foul when it fails. 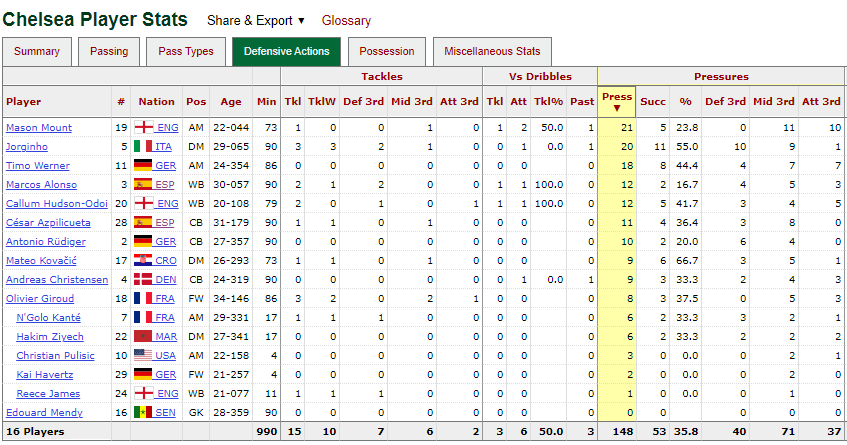 One of Chelsea’s best performances this season came in the first leg of their Champions League tie against Atletico Madrid. Looking back at it, it is one of the best counter pressing performances by any team in Europe this season, the coordination, the movement, the emphasis on the ball handler, all facets of the press were very good during that game.

As seen in the image above from fbref.com , Chelsea made 73 pressures in the middle and final 3rd during the Atletico Madrid game with Mason Mount leading the charge. 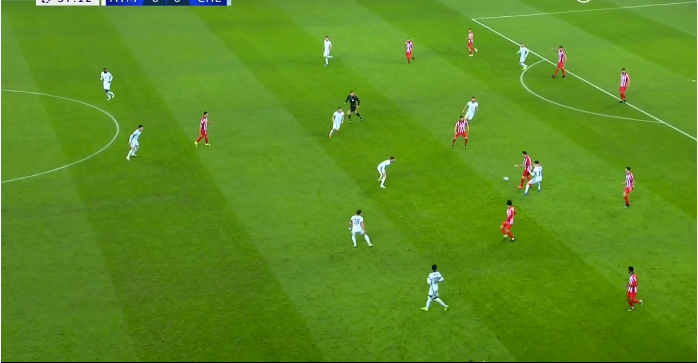 In the sequence above, after Mason Mount loses the ball, he immediately pressures the ball handler, look at Chelsea’s shape as they all gravitate towards the ball side of the field with the safety net provided by the five/six players behind the ball.

Allowing an effective shape to counterpress from is one of the underrated aspects of a 3-4-3 shape; as it simultaneously provides bodies up front and in midfield to press the ball while having the defensive security of at least five players in behind to protect counter attacks and transitions.

Using players used to the system from Lampard/Conte reigns

One thing that people do not realize about this Chelsea squad is that a lot of them played in this same shape under both Lampard and Antonio Conte in recent seasons, which facilitated their transition from the 4-3-3 to the 3-4-3.

Tuchel re-integrated Marcos Alonso who was phenomenal as a marauding wingback during Conte’s reign. He contributed a lot on both sides of the pitch; his length and height allowed Chelsea to always have an outball when they were under the press and his runs into the box were always an option during attacks.

Cesar Azpilicueta, who was also being slowly phased out of Lampard’s Chelsea side, has also found his groove again, operating as the right sided center back rather than being used as a fullback when he clearly lost his athleticism due to age. Antonio Rudiger’s athleticism has been very useful defending transitions in the back three, and Andreas Christensen has finally shown the signs of promise he showed a couple of years ago because he now plays in a system that provides him more protection because he was often targeted in a back four.

Thomas Tuchel came into a Chelsea side in disarray, with a disrupted locker room and a whole host of misfiring, underperforming big money transfers. He has managed to tighten the team up defensively, while also using his tactics and system to get the best out of some Chelsea players who looked on their way out of the club.

A lot can be said about Lampard not being afforded a lot of time, and the players sabotaging Lampard, but you cannot deny the instant impact of Thomas Tuchel. 14 games, 10 wins and 4 draws after facing Atletico Madrid, Manchester United and Liverpool has been a very impressive start to Tuchel’s career at Stamford Bridge. The question for Tuchel now is how he handles the rest of the season, does he go all out to try and win a trophy in his first six months or is finishing in European places and a respectable finish in cup competitions be enough to build next season’s inevitable challenge on. One thing is constant; Tuchel and his 3-4-3 are here to stay and Chelsea’s future is in great hands.