Portuguese coaching school is one of the most praised around the world as it produced many well-regarded managers. Sons and nephews of Vitór Frade and his Tactical Periodisation methodology spread their knowledge everywhere but, whilst the first wave of successful Portuguese coaches consisted of managers which never have been professional players or have been at very low levels – such as José Mourinho, Leonardo Jardim, André Villas Boas – the second one consists of former pro footballers. Nuno Espírito Santo, Paulo Sousa or Marco Silva all enjoyed from good to great success as players and approached their coaching career with some experience from their playing days under their belt.

Sérgio Conceição is one of them. A former offensive winger with significant stints at FC Porto, Parma, Lazio, Inter and Standard Liège and a former Portugal international, the 42-years old started his coaching career with minnows Primeira Liga’s sides Olhanense and Académica before joining more established Portuguese teams as SC Braga and Vitória de Guimarães.

But France is the place where Conceição started making a name for himself as coach and where he earned the spotlights. There, President Waldemar Kita appointed him last December, in order to avoid relegation to the struggling side of FC Nantes.

So, Conceição became Nantes’ 12th manager since President Kita brought on the club back in 2007. As soon as he came in France, Conceição showed his attitude both off and on field. Off field, the Portuguese brought on a working culture with no tolerance for lazy or undisciplined players. On field, he installed his tactical philosophy based on intensity, aggressiveness and organisation. Conceição lined Nantes in a 4-4-2 formation featuring cutting inside wingers and overlapping full-backs. Former Portugal international showed to be a tactician and a lot of players flourished under his tutelage. Amine Harit provided creativity as winger while full-back Lucas Lima proved to be a threat through the left side.

Argentinian forward Emiliano Sala quickly improved his contribution This turnaround has been so remarkable that Conceição’s side finished 7th in the table: Nantes were 18th when the Portuguese manager was appointed.

Conceição’s work in Eastern France didn’t go unnoticed as it allowed him to be signed by his former club FC Porto.

At Porto, Conceição replied the 4-4-2 formation that has been so successful in France.  He is now using at his current club and we’ll try to explain both his offensive and defensive approach.

From a tactical viewpoint, Porto’s Conceição is a high-pressing side. This Porto presses aggressively high up the field. Pressure starts up front where both forwards have to close the line of passes at disposal of the opponents. The key point over there is the attempt of Porto’s players to prevent opponent from building from the back. The high-pressure has to force the goalkeeper into a long ball which can be easily recovered by Conceição’s defenders.

Porto’s chance to make an efficient defensive effort relies on the success of this high-pressure. In fact, if the first line of pressure is overpassed, there is a lot of space at their back and the team can be caught on counter.

In order to prevent this, Conceição wants his team as quick as possible in transition, with players ready to regain their defensive positions. That’s especially true for Porto’s full-backs as the Portuguese manager asks them to rebuild the four-man backline as soon as possible.

In general, the defensive line is highly positioned and protected by a no.6 that is more a holding midfielder that a deep-lying midfielder.

At the second level, Porto’s Conceição put emphasis on a strong horizontal and vertical defensive compactness with two close banks of four and a zonal marking looking ball-oriented.

Particularly interesting in Sérgio Conceição’s favorite 4-4-2 is exactly the role of both the central midfielders. In fact, they share the responsibility of supporting the defensive phase and also starting the offensive action with Porto in possession. Óliver first – now Héctor Herrera – and Danilo play very close each other, but the Spaniard also has freedom to push forwards high up the pitch.

During this past pre-season, Óliver explained what Sérgio Conceição asked them: “a lot of intensity when it comes to defending and that he provides a passing line when attack,” he said. In the build-up, is not unusual to see one of the central midfielders dropping deep to help to get the ball progressing out from the back whilst the full-backs push higher up as wing-backs, providing width.

Wingers also have to move higher morphing the 4-4-2 into a kind of 4-2-4 and they are also suited to cut inside so you can see five footballers – both wingers and forwards and one central midfielder – occupying the middle and the centre-halves in the positional attack.

Playing this way, Conceição’s team looks to exploit both depth and width: the high number of players in the central area can outnumber opponent in the middle while, should rivals stay centrally compact, Porto still can rely on the flanks from where provide crosses for Moussa Marega and Vincent Aboubakar.

But the whole formation is very fluid as you can see other formations taking shape with Porto in possession.

Another feature of Conceição’s offence is coach’s preference for dynamic forwards instead of a central striker paired to a mobile forward roaming around him. Both forwards alternatively drop deep to get the ball and to become a link between midfield and the final third of the pitch. This movement also tries to destabilise and manipulate the opposing defensive structure creating spaces to be exploited by Porto’s wingers and upcoming players.

Conceição’s offensive approach put emphasis on controlling the ball: Porto’s average ball retention is 56.5%, the third best in Primeira Liga just behind Benfica and surprising Rio Ave’s Miguel Cardoso. This preference for controlling the ball is also highlighted by the stats showing us that 23 of the 30 goals Porto scored so far (76.6%) came from organised attacks. Conceição’s side also produces an average of 400 short passes per game (second best of Primeira Liga). 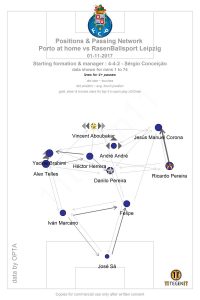 Recently, in Champions League games, the Portuguese gaffer started to utilise a 4-3-3 system, with Sergio Oliveira or Andre Andre as third midfielder as highlighted by the above pass map provided by @11tegen. But the model remains the same.