Positivity around National Team Head Coach Gareth Southgate is slowly rising and Eddie Howe remains a well touted young manager for the rise of his ball playing Bournemouth side. But one of England’s top coaching prospects has, despite 20 years top level coaching experience, largely flown under the radar. Until now.

Several years spent working as Carlo Ancelotti’s right hand man is surely about as fine an education as football can provide, and there are plenty of elements to Clement’s relegation fighting Swansea side to suggest he is putting what he learnt into practice.

Clement’s first win in charge of Swansea came against Top 4 side Liverpool with a textbook How To Defend Zonally Against A Superior Attacking Side performance.

As Liverpool build from the back Henderson drops between the centre-backs to create a back three. Swansea match them man-for-man up top with a 4-3-3 shape to force Liverpool’s deepest players into rushed passes. As Liverpool reach the half-way line Swansea surrender the wings and move into a 4-1-4-1 shape against an attacking side who lack tall, physical targets for crosses and instead prefer to create their chances through the middle. By flooding the centre of the pitch, Swansea slow down Liverpool’s ability to move the ball from side to side by forcing them to reach the wings via high, looping, diagonal passes. Such passes move slowly enough that Swansea can move their narrow shape across the width of the pitch dependant on where the ball is.

Clement's Swansea remain compact by moving between a 4-1-4-1 and 4-4-2 to close down opposition players taking up positions between lines. pic.twitter.com/sQADdCJ4aA

Later Swansea played Hull who are a lesser attacking threat and also like to build their play through their full-backs in deep positions. Clement makes a subtle adjustment as Swansea defend wider and a little higher in more of a flat 4-5-1 with Swansea’s winger sticking to the Hull full-backs more tightly. When passing out from the back Clement has Jack Cork drop between the centre-backs to create a situational back three. Not an uncommon method as noted before with Liverpool but for Clement this is part of a wider, zonal, philosophy that affects play throughout the pitch. Entering into the opposition half Swansea are drilled to maintain occupation of the 5 vertical divisions of the pitch. Regardless of players switching with one another Clement’s men are observing their teammates and their own positioning, making sure to keep in line with a series of guidelines that keep the opposition stretched and easier to open up. Typically Swansea build their play up the left hand side where their two best playmakers, Sigurdsson and Carroll, combine with creative movement and quick passing. Sigurdsson who plays nominally on the left is able to frequently move into the 10 space because the width is maintained by speedy, attacking full-back Martin Olsson.

On the opposite flank the right full-back Kyle Naughton, who is very comfortable on the ball, instead remains fairly deep and even comes in narrow to central midfield positions where he has creative duties. This enables tricky winger Luciano Narsingh to remain out on the right touchline, threatening to get in behind.

This left-to-right asymmetry is a powerful tool in unlocking defences. Swansea are able to overload the left side of the pitch because Narsingh’s high and wide position keeps the opposition wary of leaving his side unoccupied. If the opposition do becomes too narrow in attempt to stop Carroll and Sigurdsson’s combinations Swansea can quickly switch the ball out to the right hand side where Narsingh can use the space provided to run with the ball and take players on.

There are clearly some very modernist coaching methods going on at Swansea with Clement in charge. This makes Llorente’s role all the more interesting. Typically, teams who play expansive, possession football utilise tall and powerful forwards by having them play with their back to goal, holding up the ball and and brining others into play.

Llorente, however, is rarely involved in that way. Instead he remains central, on the half turn, used almost exclusively as an old-school battering ram style target man who is excellent at turning Swansea’s quality crosses into goals. 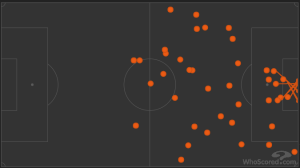 Attacking Philosophy and Use of Squad

When playing superior attacking teams, such as Liverpool, Wayne Routledge is preferred to Narsingh for his greater work ethic and defensive ability. Routledge has also featured in recent weeks in the absence of first choice right-back Kyle Naughton.

In fact there’s been a string of injuries in recent weeks which have hampered Swansea’s ability to play the style of football that Clement asks of them.

That dedication to an attacking style in the face of adversity can be seen as a continuation of the identity Swansea brought with them when they first came to Premier League. But it may also be seen as a limitation of Clement’s own experiences.

Having spent the majority of his career as Carlo Ancelotti’s Assistant Manager, working with world class talents, Clement has little experience in having to grind out tight results with some of the more workman-like players filling in the Swansea squad.

This may prove to be a feature of Clement’s career as his job performance increases as he rises up the football ladder to handle squads that he is more accustomed to.

Clement has yet to record a draw at Swansea, instead adapting a win or lose philosophy that is contrary to the efforts of most clubs caught in a relegation battle. Clement, however, may prove that to be an under-appreciated method as he currently sits on twelve points from nine games. A points per game ratio of 1.33 – more then enough to survive until next season.

Clement arrived at the club at the same time as analytics and player recruitment expert Dan Altman. In the immediate transfer window Swansea purchased Tom Carroll, Martin Olson and Luciano Narsingh who are all key players in Clement’s first XI.

It will be interesting to see if, following this promising start, Altman remains with Clement throughout his career.