The appointment of Massimo Oddo hardly brought on enthusiasm after Udinese decided to end the difficult regime of Luigi Delneri. Still, Udinese didn’t reach the heights of Serie A since many seasons with some arguing that the Pozzo family is currently considering their Italian side as the second team of an ownership who also runs Watford in the Premier League. The fact Udinese changed as many as eight managers since 2009 has not helped them to find stability.

Delneri was in charge in the first thirteen league games with mixed results, leaving a strange feeling in the fans about what they’ve become: a sort of second squad to the Pozzo family with the ownership more interested in what’s going on cross-Channel.

A former pro footballer with an excellent playing career – in which he also played for AC Milan – Oddo started his coaching experience once he was appointed as coach by Pescara in Serie B.

They were playing above average producing some of the best football in Italy. Oddo built that side as a possession-based one and led Pescara to be promoted at the end of 2015/16 campaign. That said, the following term has been a nightmare with Pescara’s Oddo earning only a win: a drawing board victory due to the fact that Sassuolo irregularly lined up the winger Antonino Ragusa.

Despite this Serie A record under his belt, insiders and pundits repeatedly expressed confidence in Oddo’s methods and many owners approached him in the last few months as they have been thinking about the former Milan full-back as a potential head coach for their teams.

So, although Oddo’s results in the top tier were disputable, the fact he would get another chance was only a matter of time. It happened with the dismissal of Delneri.

No one is arguing with the job Delneri has done at Udinese last season, when he took over a team in peril to be relegated and led them into a more comfortable territory. But things went differently this season. It could reflect the general level of Udinese’s current roster but also highlights Delneri’s difficulties too in making something good out of his players. When Udinese’s troubles started, all the focus has been placed on Delneri’s system – and particularly his much-talked back four and the use of the skilful Rodrigo De Paul as a winger – but some players too deserved some degree of responsibility. Among them, centre-forward Maxi Lopez and box-to-box midfielder Jacob Jankto which have underperformed. That’s without talking about a team that faced offensive troubles since Cyril Théréau has been lost to Fiorentina this summer.

The last draw against Inter provided some glimpses of Oddo’s treatment. Whilst Nerazzurri were expected to extend their unbeaten home run against Udinese, was Oddo’s team to steal the spotlight with a great performance in which they scored twice and got the three points. They did it out from a 3-5-1-1 often becoming a 5-3-1-1. For Udinese this was a healthy back to the basics as they enjoyed success with a three-man backline since the Alberto Zaccheroni era.

The whole Udinese performance was marked by organization and defensive compactness through which Oddo’s players forced Inter to make mistakes in their decision-making. Oddo was happy to allow Inter to control both the ball and the game as he thought Udinese could be dangerous on counters, as it happened. Furthermore, Udinese have been particularly impressive in their control of the midfield, where Antonin Barak, Seko Fofana and Jankto closed Inter’s passing lines. 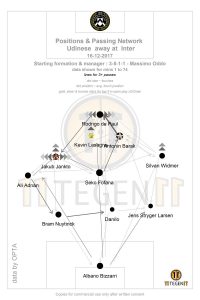 The pass map take from @11tegen shows us the more direct approach Oddo employed against Inter.

Not news for a side that drastically improved under Oddo. In fact, whilst Udinese registered four wins, zero draws and eight losses under Delneri’s regime – for an average of one point per game –  since Oddo’s arrival the Zebre amassed three victories, zero ties and just one loss, averaging an impressive 2.25 points per game.

Speaking about what Oddo brought on, skilful attacking forward Rodrigo De Paul talked about “a new attitude”, pointing out as which says a lot about rising expectations after facing last season’s runners-up. And exactly De Paul’s role within the team was a discussion topic – and a though one – between the former manager and the club’s owner as Delneri often lined up the 23-years old Argentinian out wide playing as winger, a spot where De Paul looked uncomfortable.

In comes Oddo and the new manager cleans the house from the preview tactical thoughts, starting with the no.10. In fact, Oddo moved De Paul up top as an attacking midfielder/second forward, in a position where he’s more suited. This move signalled an improvement for the former Valencia player.

So, De Paul is a good example of an individual improvement under the new regime, along with Jankto, who were underperforming with Delneri. From a tactical viewpoint, Oddo installed a physical approach featuring a lot of pressing in order to steal the ball and then to counter-attack. If he will also try to implement a more complex buildup, remains to be seen. Udinese’s centre-backs are not accustomed to making the ball progress from the back although their passing stats suggest there are some players with which Oddo can work such as Jens Stryger Larsen (averaging an 82.7% of pass success) or Bram Nuytinck (86.8). Right now, we have seen some attempts of building from the back although the long ball as a way to avoid the opposition’s high press is still an option.

Oddo is training his side to get the ball out from the back in their build up.

There also was a better offensive fluidity since the new manager took over the reign over there. Just time will tell us if Oddo will stay faithful to his much-liked possession-based playing style at Dacia Arena or if the reverse he faced in his first season in Serie A with Pescara convinced him to install a less-complex offensive system.